DEARBORN, Michigan – On March 3, 2014 at approximately 8:45 am Dearborn Police responded to the 1600 block of Linden St. for a home invasion that was just discovered. The homeowner told officer’s that her house was secured when she left in the morning but when she returned home a few hours later she found her rear door had been forced opened. She discovered her flat screen television and computer tablet missing, along with a few pieces of costume jewelry. A neighbor of the victim told officers that he observed a White Chevy Impala parked in the driveway of the victim’s home earlier that morning. The vehicle was driven/ occupied by a single black male. Through further investigation and the assistance of local businesses, detectives were able to recover some of the stolen property. 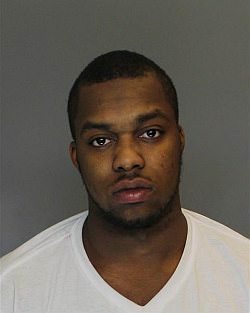 On March 7, 2014 two additional home invasions were reported in the same neighborhood on Snow Street. The homeowners in these incidents reported jewelry, a computer and a handgun were taken during the incidents.

Detectives were able to link a suspect to some of the stolen items. Dearborn Police Special Operations Unit began surveillance on the suspect. Twenty one year old Detroit resident Rashaad Taylor was observed with a computer matching the description and later confirmed to be the one taken from Snow Street. Taylor was stopped and officers recovered the handgun and computer that was taken from Snow Street.

Taylor was arrested and charged with Home Invasion 1st degree, 2 counts of home invasion 2nd degree, Felony Larceny of a Firearm, and Felony Firearm. Taylor was arraigned on March 8th, 2014 and his preliminary exam is scheduled for March 21, 2014. He currently is being held on a $10,000 bond.

Chief Ronald Haddad states, “With the help from of our business community and residents we were able to quickly identify the suspect and make an arrest. A dangerous career criminal cannot victimize the community any longer. See Something, Say Something. It works! ”