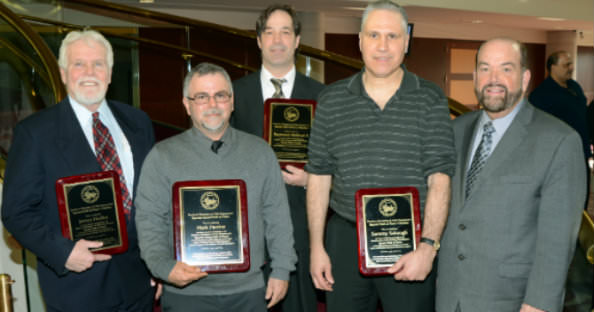 James Hadley earned membership in the Hall of Fame for his achievements on the softball fields, basketball courts and touch football fields of Dearborn. Like so many members of the Recreation & Parks Department’s Hall of Fame, Hadley began his local athletic career by participating in the many youth sports programs offered by the city in the mid-to-late 1950s. In the early 1960s, Hadley launched a long and successful career in adult-level sports programs. The honoree enjoyed long tenures in the city’s Class A Basketball League with First Edition Lounge, Barnaby’s, Four Seasons Lounge and Rillston Reality, and the city’s Touch Football League with Last Chance Lounge, Fuel Pump, Four Seasons Lounge, Barnaby’s and First Edition Lounge. Hadley was also a standout performer in the city’s Adult Softball Leagues, competing with Flaigle Tool & Die, First Edition Lounge, Holly Mar, Rillston Realty and Barnaby’s during a nearly two decade-long career. 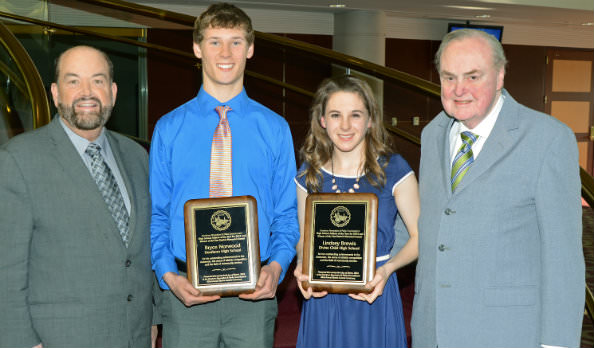 Raymond Molinari II garnered membership in the Hall of Fame, largely as the result of his accomplishments during a hockey career than spanned more than four decades. Molinari, like Hadley, launched his hockey career by participating in the Dearborn Recreation & Parks Department’s youth leagues, starting at the tender age of 10. Molinari played in the city’s Mite, Squirt and PeeWee Leagues with Adray Appliance, advancing to the semi-final round state competition with his Squirt team. Molinari continued to play hockey as he grew older, winning three state championships in Men’s Division I competition and a Junior A National Championship with a Compuware team in 1985. In addition to playing, Molinari has coached youth hockey for several years, winning the national championship with his Compuware Midget-Minor team. As the manager of New Place Lounge, Molinari has also supported the city’s adult softball program by sponsoring teams in the Class B League for many years. 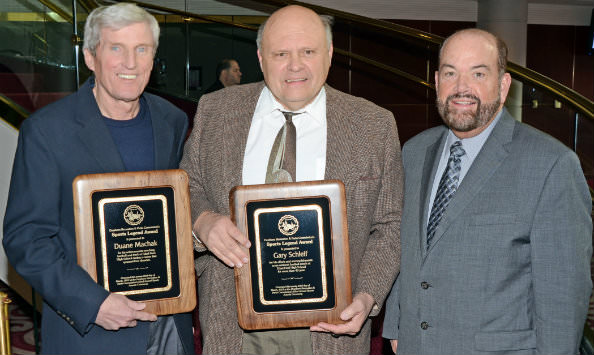 Honored at the Recreation and Parks Department’s annual Sports Awards were newly inducted Sports Legends (from left) Duane Machak and Gary Schleif, who were congratulated by Mayor John B. O’Reilly, Jr. (photo courtesy of City of Dearborn)

The induction of Hadley, Molinari and Sabaugh brings the total membership in the Dearborn Recreation & Parks Department’s Hall of Fame to 166. The Dearborn Recreation & Park’s Department’s Special Award Hall of Fame—created to honor sponsors, officials, managers, coaches, administrators and other supporters for their contributions to department-sponsored activities—also welcomed a new member. Mark Perrine earned membership in the Special Award Hall of Fame for his commitment to, and support for, the city’s youth baseball and football programs. Perrine was one of the original six head coaches when the Dearborn Youth Football Association (DYFA) was launched in 2001. Perrine served as a head coach with the Dearborn Lions Silver (now, the Dearborn Lions) for 10 of the subsequent 11 seasons before moving on to coach the newly created Dearborn Thunderbirds in 2013. In addition to coaching, Perrine served on the DYFA Board of Directors, as well as on the Dearborn Lions Board of Directors, and is currently the President of the Dearborn Thunderbirds. Perrine also coached in the Dearborn Baseball Association, managing a travel team from the 2003 through 2007 seasons. With his induction, Mark Perrine becomes the forty-sixth member of the Dearborn Recreation & Parks Department’s Special Award Hall of Fame.

Also honored at the Annual Sports Award Ceremony were long-time Edsel Ford High School coaches Duane Machak and Gary Schleif, who were presented with the Sports Legends Award, bestowed upon Dearborn residents who distinguish themselves in sports beyond the level of Recreation & Parks Department-sponsored activities. Machak graduated from Edsel Ford in 1966, and after earning a degree at the University of Michigan, he returned to his alma mater to begin what turned out to be a 40-year teaching career. Machak quickly became involved in the Thunderbird football program, serving as an assistant coach for nearly four decades, including 23 seasons during which fellow Sports Legend Award winner, Jack Bridges, was the head coach. For his achievements on the sideline, Machak was inducted into the Michigan High School Football Coaches Hall of Fame in 2003. Machak’s coaching resume additionally lists a long stint as a track coach at Edsel Ford, assisting with both the boys’ and girls’ teams for more than four decades.

Like Machak, Gary Schleif also graduated from Edsel Ford. Following matriculation from Northern Michigan University, Schleif returned to Dearborn, launching a long teaching career at Salina and Stout Middle Schools. In 1969, Schleif joined the Edsel Ford football coaching staff, becoming the varsity line coach shortly afterward.  He held that position through the tenures of two head coaches—Jon Davis and Jack Bridges—and continues to hold it under current head coach Mark Tyler. Last year, Schleif was inducted into the Michigan High School Football Coaches Hall of Fame and named “Assistant Football Coach of the Year” by the Michigan High School Football Coaches Association. Thunderbird supporters have honored Schleif by creating and funding a student athlete scholarship in his name. Since its inception, the Sports Legend Award has been bestowed upon 29 deserving recipients.