The controversy apparently began when local attorney Majed Moughni complained to the Detroit Free Press about flyers handed out in the Dearborn Public Schools advertising an Easter egg hunt. 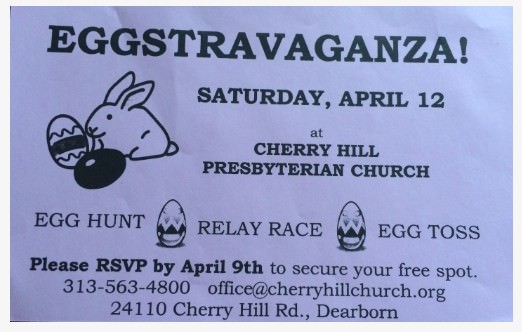 On April 2nd, Mr. Moughni posted an image of the Eggstravaganza flyer on the Dearborn Area Community Members Facebook page with the following comment: “Today, students at Howard Elementary School, in Dearborn, received this church notice, which they brought home. Is promoting church activities allowed at public schools (separation of church and state)? If so, can Islamic Centers promote Muslim holidays by sending notices to all Dearborn Public School students? What’s your thoughts?” The Facebook post only received 101 comments, many of them in favor of the Easter Egg hunt. A comment by Rania Ziadeh was typical: “Yeah why not. They are only advertising the egg hunt so no big deal.” Another comment said: “Nothing about an Easter bunny or an egg hunt is religious. Last time I checked neither were mentioned in the Bible or the Koran. If an Islamic center promoted an egg hunt there would be nothing wrong with that either.”

On April 4th, the Detroit Free Press story ran with the headline: Muslim parent upset over school flyer promoting church’s Easter egg hunt.  (Only one parent is quoted in the story.) That story was re-posted to the Dearborn Area Community Members page with the comment: “Finally, someone got the correct message, it’s not about the ‘egg hunt’, it’s about public schools promoting events that take place at a church. (It’s called the US Constitution – separation of church and state) Greg Lipper, senior litigation counsel at Americans United for Separation of Church and State, said he has some concerns about the flyer since the event is being held at a church.”

Pastor Neeta Nichols of Cherry Hill Church said: “There is not a religious component to this event.”

Later in the day on April 4th, an image of the egg hunt flyer was posted on Facebook, along with the remark: “For those of you wanting to attend the ‘egg hunt’ here’s the flier. Let’s be clear, we’re not against the ‘egg hunt’, we’re against public schools distributing flyers for an event at a church. This church can [even] use our page to promote it’s event.”

Later on April 5th, Yahoo republished the Daily Caller story on their front page with the headline: Now Muslim parents are complaining about flyers for Easter egg hunts. (That story had over 17,900 comments at last count.)

“MUSLIM EGGSTAVAGANZA APPRECIATION –  The Muslim and Arab communities in Dearborn invite you to join us as we gather in solidarity with Cherry Hill Presbyterian Church congregation to show our support, friendship and appreciation for the church’s efforts to bring us together.”

“The gathering will also send a powerful message to those who are trying to divide us and turn us against each other: We will remain united as one diverse community.  Join us Sunday, APRIL 6 at 10 a.m. at Cherry Hill Presbyterian Church, 24110 Cherry Hill Road in Dearborn. Osama Siblani, Publisher, The Arab American News”