DEARBORN, Michigan – When Manley Cox left Dearborn in September 1943 to join the U.S. Marines Corps and serve in World War II, he had just one regret, the 17-year-old would not be able to complete his senior year at Dearborn High School.

This week, after more than 70 years, Cox fulfilled his dream of graduating from high school. During a special ceremony at Dearborn High on September 16, 2014, on behalf of the Dearborn Public Schools, Superintendent Brian Whiston awarded 88-year-old Manley Cox his high school diploma. 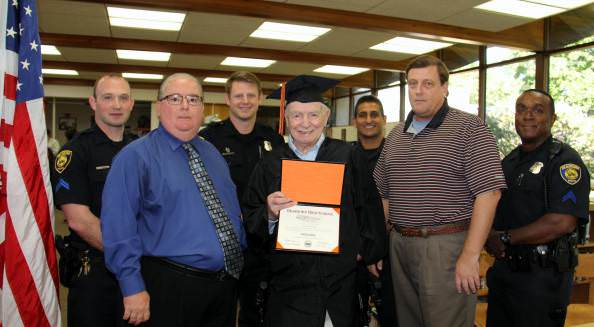 “We are eternally grateful for Mr. Cox’s service to our country and honored to count him as a graduate of Dearborn High,” commented Superintendent Whiston.

Dearborn High School principal, Chuck Baughman, arranged to have a group of current Dearborn High students from teacher Matthew Schelif’s U.S. Government class attend the presentation along with several teachers and other guests. 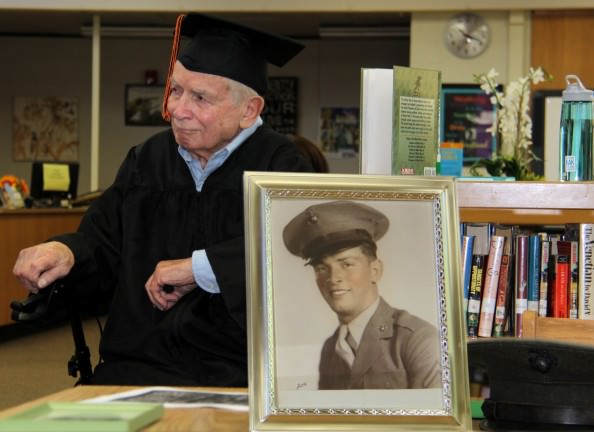 Mr.Cox then as a young Marine in 1943 and now as a proud graduate of Dearborn High.

“This is the most important day of my life,” Cox said to his daughter, Deb Cox, just before he received his diploma. She then asked him, “What about the day you married mom?” and he responded, without missing a beat, “That was her deal – this is my deal!”

Speaking to the students assembled for the presentation, Deb Cox proudly shared medals, photographs, a uniform hat, and other memorabilia that her father has saved from his days in the 5th Marine Division of the United States Marine Corps. The division was formed exclusively to fight in the Battle of Iwo Jima – one of the most deadly, well remembered battles of World War II.

During the intense 36-day battle, Corporal Manley Cox carried the radio for his unit. “He says that is what kept him alive – it kept him moving,” his daughter said. 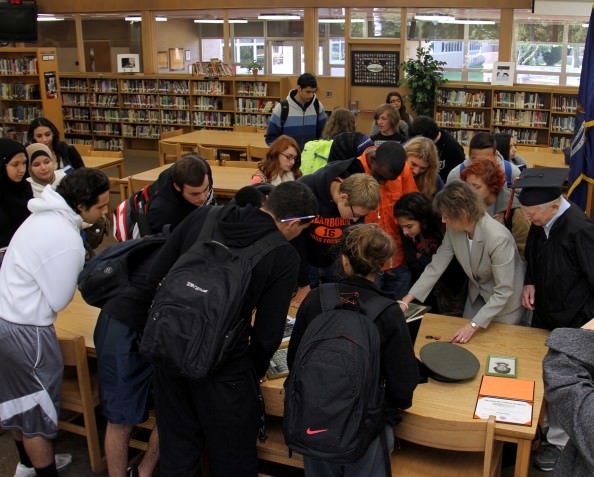 Debra Cox (Mr. Cox’s daughter) shared photos and other items from her father’s past as students eagerly introduced themselves and thanked the WWII veteran for his service to the United States.

Cox told the high school students, the most significant life lesson he learned while in Iwo Jima, seeing his friends die, “Money can’t buy your life” — it couldn’t buy back the lives of his buddies.

“My father told me about things that you’ll never see in books about World War II,” noted Deb Cox. “Such as, when the flags were raised at Iwo Jima, the Naval Fleet sounded their bull horns in the harbor. He said ‘That’s why, above the noise of all the fighting, we looked around and up, and we saw the raising of the United States flag.”

As defined in Michigan Public Act 181, honorably discharged veterans are eligible to receive a high school diploma if they attended a Michigan high school and left school to serve in the military during WWII, the Korean Conflict, or Vietnam.