You are here: Home / Community / Derek Hughes Named 2014 Volunteer of the Year

DEARBORN, Michigan – Volunteering is a family tradition for Derek Hughes. His mother volunteered for 18 years at Hutzel Hospital, helping in the gift shop and the maternity ward. His dad volunteered for five years, recording for the blind at the Detroit Institute of Arts. So, it probably came as no surprise to people who know him that Hughes was recognized by the city’s Senior Services Division as the 2014 Volunteer of the Year. 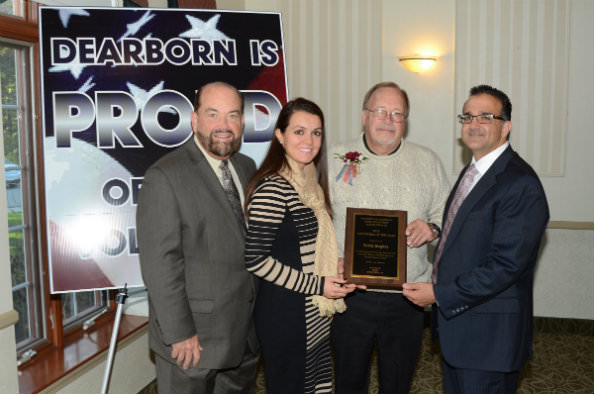 Mayor John B. O’Reilly, Jr. (left) honored the 2014 Volunteer of the Year Derek Hughes (center) at
the annual Volunteer Recognition Breakfast organized by the Dearborn Senior Services Division
of the Recreation and Parks Department on Oct. 8. Joining in the congratulations were Council
President Susan Dabaja (second from left) and Councilman Michael Sareini (right).

He was honored by Mayor John B. O’Reilly, Jr. and congratulated by other elected officials during the annual Volunteer Breakfast held Oct. 8. Dozens of other Dearborn residents were also recognized for helping seniors through the Meals on Wheels program, income tax preparation, exercise classes, processing bus passes, and working on the newsletter.

Hughes has delivered Meals on Wheels to homebound seniors for 16 years and is still going strong. He has a regular route two days a week at Sisson Manor, but also frequently substitutes for other drivers. Senior division staff say that Hughes has a great attitude, and for those who know him, a wonderful sense of humor.

Born in Highland Park, Hughes grew up in Indian Village and received an associate’s degree from Macomb County Junior College. In 1989, he moved to Dearborn, and two years later married Susan. Between them they have six children. He started delivering Meals on Wheels in 1998 during the holidays. He retired from USF Holland Motor Express in 2001.

Hughes said he and his siblings were taught at a young age that they should never expect to receive without first giving, and he enjoys giving his help to Meals on Wheels. “I will do meals as long as I can because of the people I have had the pleasure of working with,” Hughes said.