You are here: Home / Business / Dearborn Area Chamber’s Annual “A Tale of Our Cities”

DEARBORN, Michigan – Dearborn Mayor John B. O’Reilly, Jr. and Dearborn Heights Mayor Daniel S. Paletko will address local business and community members and leaders at the Dearborn Area Chamber of Commerce’s annual “A Tale of Our Cities” Business Builder Series luncheon on Tuesday, January 13, 2015 from 11:30 am – 1:30 pm at The Fairlane Club, located at 5000 Fairlane Woods Drive in Dearborn. 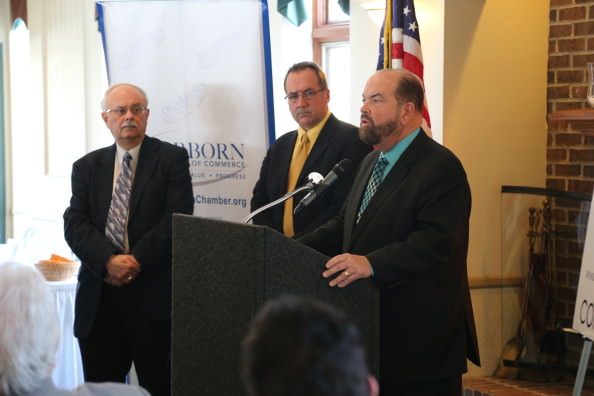 Dearborn Mayor John B. O’Reilly, Jr. and Dearborn Heights Mayor Daniel S. Paletko will address local business and community members and leaders at the Dearborn Area Chamber of Commerce’s annual “A Tale of Our Cities” Business Builder Series luncheon on Tuesday, January 13, 2015 from 11:30 am – 1:30 pm at The Fairlane Club in Dearborn. Both mayors will give a business recap of 2014 and a brief forecast for the upcoming year.

This event, sponsored by Comcast, is open to the public and will include lunch and networking, to be followed by an enlightening and informational presentation by Mayors O’Reilly and Paletko. Both mayors will give a business recap of 2014 and a brief forecast for 2015 followed by a question and answer session.

The Dearborn Area Chamber of Commerce provides 600+ members with the opportunities and resources to engage and network with other businesses, enhancing financial growth, professional development, and the ability to contribute to a thriving community environment.

John B. “Jack” O’Reilly, Jr. has been an elected public servant in Dearborn since 1990, and Mayor since 2007. He was re-elected Mayor in November 2013 with 81 percent of the vote. Before becoming Mayor, he had been president of the Dearborn City Council for 17 years.

Throughout his public career, Mayor O’Reilly has consistently demonstrated his commitment to Dearborn neighborhoods through actions that seek to preserve the City’s high quality of life and attractive residential areas. He has promoted economic development through beneficial relationships with county, regional and state agencies, and corporations like Ford Motor Co., Severstal North America, Oakwood Healthcare System, and Ford Land Development.

Mayor O’Reilly has significant experience in regional, state and federal levels of government, and has participated on – or led — many boards, task forces and high level committees.

In 2012, he was part of the Task Force reporting to Lt. Governor Calley on the personal property tax issue.

In 2013, he was named to the Board of Directors of the Michigan Municipal League. He is the 2014 chair of the Downriver Community Conference, following many other leadership positions he has held with the regional organization. He also participates with the Urban Core Mayors, a bipartisan, multi-regional coalition of 13 central city mayors, and the Conference of Western Wayne.

He participates in the United States Conference of Mayors and the Southeast Michigan Council of Governments. He is also on the M-TEC Training Alliance Board (a program of Henry Ford Community College) and works with the Wayne County Transit Authority.

Before becoming Mayor, he was the executive director of the Southeast Michigan Community Alliance (SEMCA) from 1996-2007.

Over his long public service career, Mayor O’Reilly has been a Washington staff counsel and district director for U.S. Congressman John D. Dingell, and a chief of staff in the Michigan State Senate. A licensed Michigan attorney, he holds Bachelor of Arts and Juris Doctor degrees from the University of Detroit, and is also an alumni of Oakland University. He is a graduate of Dearborn’s St. Alphonsus High School.

He and his wife, Christina, are the parents of Devon, Sean and Dylan.

Mayor Dan Paletko has a long history of public service. Before winning election to the Michigan House of Representatives, Mayor Paletko was a longtime member of the Dearborn Heights City Council. He is retired from Ford Motor Company where he was a financial manager. Mayor Paletko is a Certified Public Accountant and holds degrees from the University of Michigan, University of Detroit and Wayne State University.

Mayor Paletko is active in his community and is a member of the American Legion, Volunteers for Income Tax Assistance and ushers at St. Linus Church. He has two daughters, Marie and Ann.