You are here: Home / Arts / The Dearborn Renaissance

From Left to Right- Paint and Pour, City Hall Artspace Lofts, and Painting With a Twist

Dearborn, MI. – Michigan Avenue is a road that stretches from Michigan to Illinois. To Detroit to Chicago. Its 210 mile tract houses commerce,diversity, and most importantly history. Along with its already rich history,three businesses have taken to calling it home in Dearborn-City Hall Artspace Lofts, Paint and Pour, and Painting with a Twist and are starting to add their own history.

When the government occupants moved out from the City Hall building  in early 2011, the big question lingering was what to do with the space. Demolition was a sin for a architecturally gifted building. Taking away a major part of Dearborn’s history would alienate everyone from the community to the state itself. Along comes Artspace whose mission statement is aimed at preserving landmarks such as city hall and at the same time providing low income housing for starving artists, with the proposal to turn the building into a community where artists can collaborate, work,and live in.

“Somebody went forward to create the artspace organization  as a way to protect artists and their homes so that they don’t get pushed out of their homes because rent is getting raised.” Says Jennifer Bridges ,the property manager, overseeing the functions of the property and interaction with the artists. 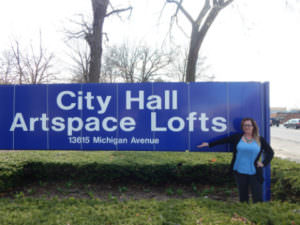 But was there really an audience for a community like this? Were people really interested in art anymore? Before a deal can be approved, studies had to be taken and community sessions conducted. Based on the information gathered, Dearborn seemed the perfect place for a Artspace project and the former City Hall building, the perfect building. So the former City Hall building becomes the City hall Artspace Lofts, and three years later from conception and one year from construction, in January 2016 it opens its doors for the first applications.

Artist is a broad term-ranging from anyone who paints to writers to dancers. Carol Goines, sculpture, and Kate Sample , dancer, see it as a privilege to live in such a historical landmark. Carol , who studied at University of Michigan School of Art and Design garnishing a BSA in sculpture, has lived there since January look forward to what his family will gain from the experience.

“I’m thinking about what my kids can do,how they can participate in these community of people and be surrounded by these creative jewels that they will see the value of art,not just from my own,but it all.”

Kate Sample studied at Grand Valley and gained a Bachelors in international relations. She sees dancing as a creative outlet and has been doing it for twenty years. She is most excited for the interaction with the community.

“I think artists always feel a sense of community with each other. It takes a certain strength to be an artists . You feel strength in others and you connect with people who wanna do the same thing. Artists are always open to being part of a community so it reaches outside of Artspace and into Dearborn.”

In less than 3 months, more than half of the lofts are filled with only 23  available. City hall Artspace is aimed for the serious and passionate artists working towards fruitful careers but further south of it, two establishments are aiming for businesses full of entertainment, and like Artspace, community. 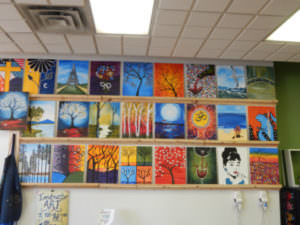 Art prints, by instructors, displayed on the stage wall available to purchase.

Paint and pour offers a unique experience-where,for $35, you can take a 2 hour class about painting and drink wine. A simple concept yet its a fast selling trend that offers entertainment and a sense of community. Where you can take part in public classes or arrange private events. A business, that was founded four years ago in Brighton,  has since expanded into a Dearborn location in August 2015. Run by Mike Patino, who worked at a medical management company, and Dennis Spencer, who was an artist. Denis handles the set up of the classes, the fist end operations, while Mike handles the back end operations and handles the business side. and commerce side.

“We have a three prong mission goal. {T0} bring art to people and introduce them to creative ways to bring art into their lives. Build a business model where by artists can make a living being artists {because} its really one of the most difficult professions to make a decent wage on. And then its a really awesome mechanism for giving back to the community because its sort of a fascination venue where people come to our sort of classes and then they go off to like the bars and the clubs and everything surrounding the local area. We really try to structure our business model on the perspective of being a part of that downtown microcosm.” Mike says.

They take a more direct approach to giving wages to artists as instructors. Having more than 40 artists on staff, constantly teaching classes and selling artwork from inside the establishment. Allowing them to keep growing and making a living doing what they love to do. It creates job opportunities while an up and coming establishment,with the same premise, takes a different approach.

Further down, you will find Painting with a Twist located in the West Village Commons, part of a franchise that is owned by husband and wife Julian and Alyse Urban. They put more emphasis on the community and the people who actually attend the classes. Former occupational therapists who were inspired to become business owners after their own personal experiences with the franchise as a stress reliever. It took eight months to open due to delays such as a liquor licenses and had a grand opening on April 4th. Painting with a Twist and locations throughout Michigan in Farmington, Ferndal,Warren, and Detriot but it’s Dearborn that offers its unique culture. 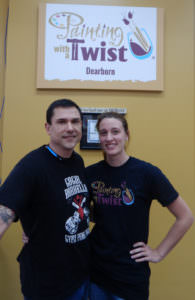 Painting with a Twist owners Julian and Alyse Urban

“{Dearborn has} a very diverse community. All walks of life in Dearborn. From your white person to your Hispanics to your Arabics. They’re all here,its a great mix of different cultures here in Dearborn.” Says Julian.

It’s the community that benefits from places like Painting with a Twist. Its a unique experience that attracts the casual and professional artists. Enter into it’s Dearborn location and you’ll observe the amount of diversity from skill level artists to different ethnicities. Yet all who enter come for the entertainment,intimacy,and comradery.

“Its Something different. It’s not the same old thing, its not going to the movies. You get to take your painting home and keep it as a souvenir. Its personal. Its you doing it versus you going out to buy something. You’re doing it yourself and it adds to the experience. You can get your friends and be intimate.” Says participant Morgan Bennett.

City Hall Artspace serves as an opportunity for artists to gain affordable housing and work together as a collective community . Paint and Pour serves as an opportunity for artists to gain recognition and spread their gifts. Painting with a Twist allows everyday people to take part in a experience and be intimate with each other all in a few hour time period.  These businesses work as a catalyst for business to countless art supplies store on Michigan Avenue such as Staples and Blick. They serve as a community,as individual establishments that at first glance, aren’t connected. But if you look deeper, you discover that they’re the same. They call Dearborn home and Dearborn  contains a sub community filled with artists and business owners. All of which are connected in the same mission- to bring entertainment, creativity, and interaction with the people around them to reinvigorate inspiration around the city.