You are here: Home / Community / Amazing Grace Amid Profound Controversy

EDITORIAL (31-Aug-2010) – Monday morning, at the 19th District Court in Dearborn, Judge Mark Somers deliberated over a pre-trial hearing concerning an incident which occurred at Dearborn’s 15th annual Arab International Festival on Friday, June 14th.  As previously reported in the Dearborn Free Press, several people affiliated with the Acts 17 Apologetics group were arraigned  on July 12th, on charges of “breach of peace”.  The four Christians, David Wood (a 34 year old former atheist) from Bronx, New York, Dr. Nabeel Qureshi (a 29 year old former Muslim) from Virginia, Nageen Mayel (a recent convert from Islam to Christianity), and Paul Rezkalla (18) from New York were charged with “breach of peace” or disturbing the peace.  However, 18-year-old Nageen Mayel, who was operating a video camera on the night of June 14th, was also charged with “refusing to obey a police officer’s order to stop video taping”. (It was not clear at first if police intended to arrest Ms. Mayel, or just investigate her.)

The defendant’s attorney, Robert Muise of the Thomas More Law Center (TMLC),  filed a Motion for a Bill of Particulars (in an attempt to clarify the specific charges) with the City of Dearborn on July 27.  On August 3rd, Judge Somers converted the Motion for a Bill of Particulars  into a Motion to Dismiss, giving the City of Dearborn 14 days to respond. 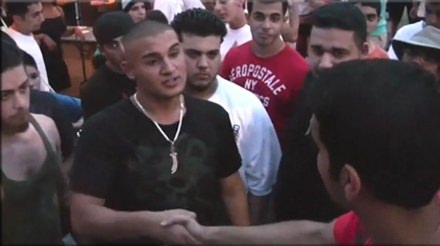 A group of young people gather around Dr. Nabeel Qureshi at the Arab Festival.

During the pre-trial on August 30, Judge Somers reviewed arguments from both sides and asked the attorneys for clarification on some issues, postponing any decision until he receives the additional information.  Judge Somers stated that he had reviewed most of the 6 hours of video tape, and asked questions about the chronology of events. Somers indicated that in the video tapes he had reviewed, the dialogue of Dr. Qureshi was “very civil and polite”.  He also requested better audio recordings of the Nageen Mayel arrest, perhaps to resolve confusion regarding the criminal complaint about Ms. Mayel.  Judge Somers also requested that Assistant City Attorney William M. Debiasi provide citations for several cases that were referenced as being pertinent to this case.  If the case goes to trial it would most likely begin on Monday, Sept. 20, 2010.

Based on questions posed at the pre-trial, the center of the controversy (according to the prosecution) might be the question of whether the defendants intended to gather a large crowd.  Judge Somers asked  “Was there an intent to gather a large crowd?” What is the definition of a ‘large crowd’? How many people?  How are intentions determined? Is 12 or 15 people a large crowd?  Is 25 people a large crowd? Did the police choose the best option for crowd control? Why not arrest the “foul mouthed hecklers” in the crowd?  Why not simply tell the crowd to disburse?  Did the police ever ask the defendants to leave the area? These are types of questions that will likely come up if the case goes to trial. Dearborn attorney DeBiasi maintains that the “content of their speech has nothing to do with it”.

Another topic posed at the pre-trial was testimony of key-witnesses like Roger Williams,  a festival volunteer who filed a complaint with the Dearborn police.

Judge Somers also raised the issue of civil disobedience (for example disobeying an unjust law or city ordinance) Was there any intention to get arrested? Somers made an analogy: “What if you wanted to be arrested for drinking at a whites only drinking fountain, or riding in a whites only section of a bus?” (Acts17 has previously stated they did everything possible to avoid breaking any laws.)

According to videos released by Acts 17,  there are deeper issues related to first amendment rights. Freedom of conscience, freedom of speech, and freedom of religion.  Freedom to change your religion and say: “I was blind but now I see” or “I was a slave, but now I’m free… and let me tell you how it happened.”

As Michael Steinberg, the legal director for the ACLU of Michigan, told the Michigan Messenger: “Based solely on the videotape, it appears that the man encouraging others to convert to Christianity was engaged in speech protected by the First Amendment. The videotape suggests that the man who was arrested was not harassing the people with whom he was speaking, nor was he inciting a riot; rather, he was engaged in the type of free exchange of ideas about religion that is valued in a free society. The man’s message may not have been popular at this particular festival, but the Constitution protects unpopular speech as well as popular speech.” 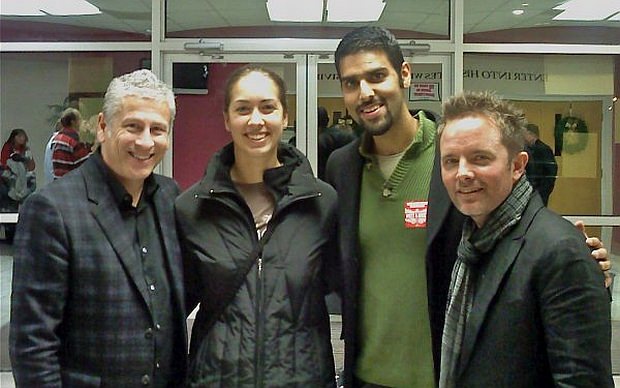 While researching background material for this article, we discovered an interesting photograph (not related to this court case) of  Nabeel Qureshi and his wife, standing next to Louie Giglio and Chris Tomlin.  Does the photograph shed any light on Dr. Qureshi’s background?  Does it prove that Nabeel Qureshi is a friend of Chris Tomlin? (Probably not. Tomlin probably forgot about Qureshi long ago… or maybe not).  So does it prove anything? Does it prove that Qureshi admires the teaching of Louie Giglio more than the exhortation of John Piper or Francis Chan? Of course not.  Does the photograph prove that Dr. Qureshi is a mainstream evangelical Christian? Maybe. Does the photograph prove anything? You decide.

As you ponder the mysteries of  epistemology,  and the limitations of photographic and video evidence, there are several more facts you might find enlightening about blindness, freedom, slavery and the story of Amazing Grace.

Some people will recognize Chris Tomlin  from songs like How Great is Our God, or Indescribable ;  many others will remember  Tomlin as the one who sang the Amazing Grace theme song for the recent movie – Amazing Grace.

Amazing Grace is a Christian hymn written by English poet, former slave-trader and clergyman John Newton (1725–1807). “Amazing Grace” is one of the most recognizable songs in the English-speaking world.

Wesley Phipps provides some interesting historical context on the black notes of  Amazing Grace, and Phipps sang Amazing Grace in front of President Obama at the National Prayer Service in 2009.  Some people remember Amazing Grace being sung at Ground Zero (WTC) after the 9/11 incident. Several days ago, Amazing Grace was sung (with bagpipes playing) at the Restoring Honor Rally in Washington DC.

More background on Dr. Nabeel Qureshi and Mr. David Wood, according to the Acts 17 website:

Dr. Nabeel Qureshi is a former devout Muslim who was convinced of the truth of Christianity through apologetics and a spiritual search for God. Since his conversion, he has dedicated his life to spreading the Gospel through teaching, preaching, writing, and debating.  He holds an MD from Eastern Virginia Medical School and an MA in Christian apologetics from Biola University. Nabeel is currently a youth pastor in Southeastern Virginia, where he lives with his wife Michelle.

David Wood is a Teaching Fellow in Philosophy. A former atheist, David converted to Christianity after examining the evidence for God’s existence and the historical evidence for Jesus’ resurrection. He has degrees in biology and philosophy and is a member of the Society of Christian Philosophers and the Evangelical Philosophical Society. David lives in the Bronx, NY, with his wife Marie and his three sons—Lucian, Blaise, and Reid.

This court case still might be dismissed. As we stated on our Facebook page on July 31st:

Since we are tax paying citizens (living in Dearborn) we are hoping for a reconciliation between all parties that will promote the good name of the City of Dearborn, show respect for the authority of the Dearborn Police Department, defend the rights and good name of ACTS17, protect the First Amendment rights of all citizens, provide proper crowd control at festivals (like the Arab International Festival in the future), while punishing any evil doers.

Sounds impossible, doesn’t it?  We are still hoping and praying for a miracle.