DEARBORN, MI –  On this day in 1606,  Guy Fawkes was executed after his conviction in the Gunpowder Plot against the English Parliament and King James the First. The conspiracy was thwarted before any explosion occurred. During a search of the House of Lords at about midnight on November 4, 1605, Fawkes was discovered guarding 36 barrels of gunpowder – enough to reduce the House of Lords to rubble – and arrested. He was executed for his crimes on January 31, 1606. 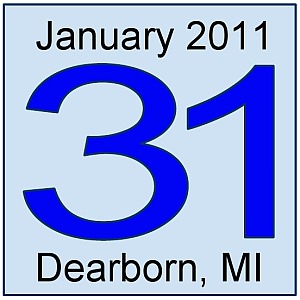 Bloggers and news hounds are  buzzing this morning, after CAIR mounted a public relations campaign Saturday about a foiled bombing attempt last Monday at the Islamic Center of America on Ford Road in Dearborn. The story had been “kept quiet”, until Saturday when CAIR issued the press release from Washington, DC.

The Dearborn Press and Guide was the first local news organization to react to the press release and published a report on Saturday night:   Man armed with explosives arrested outside Dearborn mosque.

According to the Dearborn Patch:  The Islamic Center,  and Dearborn Police Are Working to Address Safety Concerns After Terrorist Threat.  “Roger Stockham, who police say was discovered Jan. 24 at the Islamic Center of America with a large amount of high-end fireworks, faces felony charges for possession of explosives and threat of terrorism.  Dearborn Police arrested 63-year-old Roger Stockham Jan. 24 on a report that he was going to blow up the mosque, which is the largest place of worship for Muslims in metro Detroit and also houses the Muslim American Youth Academy. On Tuesday, Police shared the news with the mosque’s leaders. Although the perpetrator was caught before damage was done, the center and Dearborn Police are working together to ensure that all members of the mosque feel safe coming to worship.”

This morning, the Press and Guide reported:  Terror charges filed in plot to blow up Islamic Center.

“Roger Stockham, a 63-year-old Army veteran and ex-con, was arrested Jan. 24 with a car full of explosive fireworks in the parking lot of the mosque after driving here from his home in Imperial Beach, California. Police apprehended Stockham after receiving a tip from an employee at a local bar Stockham had just left.”

“Stockham was arraigned Wednesday [26-Jan-2011] in 19th District Court on one count of threat of terrorism and one count of explosive-possession of bombs with unlawful intent for possession of Class C fireworks. The first charge is a 20-year felony.”
~ J. Patrick Pepper – Press & Guide Newspapers

The suspect had threatened President George W. Bush according to a report in the Detroit Free Press:

“Court records out of U.S. District Court in Vermont say Stockham entered a plea of not guilty by reason of insanity to eight threat charges in the early 2000’s, when George W. Bush was president, including mailing threatening communications, threatening the president and threatening by use of telephone.”

“A report filed in the Vermont court documents and prepared by the Federal Bureau of Prisons said Stockholm, who has written that he is a Vietnam veteran, has bipolar disorder, post-traumatic stress disorder and a personality disorder.”

“Dearborn Police Chief Ronald Haddad said announcement of the arrest was delayed out of fear of copycat incidents.” – according to Gant Daily.

According to Joe Nahhas of the J.S. Fields Bar on Ford Road (almost next door to the Islamic Center) … they overheard a man talking about an explosion at a mosque in the area and called police. “When someone is joking, you know that he’s joking. This guy was not joking,” Nahhas said. “He scared us. He kept saying ‘I’m going to make this place famous.’ ”

Nahhas said the man told him  he was “going to be making history that day. He said there was going to be a big explosion.”

“I realized that this guy meant business. He [Stockham] said ‘I am having a magical moment, a historical moment. I’m going to be a part of making history.’ ” ~ Joe Nahhas – employee at J.S. Fields Bar

Nahhas called 911 while Stockham was still at the bar. When the guy [Stockham] realized Nahhas was on to him, he bolted, the bar owner said.

“We got the tip and he was there when we made the scene — It happened very quickly, which is fortunate because this guy is really dangerous. He had enough fireworks there to cause some problems had he fashioned them right.” ~  Police Chief Ronald Haddad.

“Oh-oh. You don’t need a crystal ball to tell you that this is going to be trouble: An old white guy tried to blow up a mosque in Dearborn… And what about Roger Stockham? Why would he fill a trunk with M-80s and make the long trek to Dearborn? Well, it seems that Mr. Stockham may be a couple of laceholes shy of a fully tied shoe.” – Gates of Vienna

Acts-17 Apologist David Wood had this to say in his blog:

“Sixty-Three-Year-Old Roger Stockham is off his rocker on two levels. First, he apparently wanted to blow up the Islamic Center of America in Dearborn, Michigan. This makes him a terrorist, and if reports turn out to be true, he should be sent to prison for a long, long time. Second, it seems Stockham believed that he could do serious damage to America’s largest mosque using fireworks (M-80s make quite a loud bang, but they’re not going to make much of a dent in a building). Hence, Stockham is even more inept than the many failed terrorist plotters we’ve heard so much about over the past few years (shoe bomber, underwear bomber, etc.). We can only hope that terrorists continue to make such blunders.”

January 31, 311 AD is also a day of remembrance for the Egyptian Coptic Church as they remember the martyrs Cyrus and John.  During the persecution of Diocletian three young girls (Theoctista, Theodota, and Theodossia) along with their mother (Athanasia), were arrested and brought to Alexandria. Cyrus and John, afraid that the three young girls might deny their faith in Jesus Christ — resolved to go into the city to comfort them and encourage them in the midst of their persecution. According to historical records, they were all beheaded on the 31st of January, 311 AD.

100 years ago today, on 31-Jan-2011 – Irish actor Eddie Byrne was born.  He is probably best known for his minor role as General Vanden Willard in Star Wars Episode IV: A New Hope, but fans might also remember him as Dr. Reginald Landers in Island of Terror.

61 years ago today, on 31-Jan-1950 – President Harry Truman announced his support for the hydrogen bomb, a weapon theorized to be hundreds of times more powerful than the atomic bombs dropped on Japan during World War II.

50 years ago today, on 31-Jan-1961,  nine African-American students from Friendship College sat down at McCrory’s lunch counter in Rock Hill, South Carolina. They were denied service.  “The police officer had to ask us to leave,” said John Gaines one of the Friendship Nine. Other groups around the country started to follow their lead – working for social justice and civil rights. What was life like in Dearborn in 1961? (It has been estimated that prior to 1970 – fewer then 20 African-American families lived within the Dearborn City limits.)

15 years ago today, on 31-Jan-1996 – An explosives-filled truck rammed the gates of the Central Bank of Sri Lanka in Colombo, Sri Lanka killing at least 86 and injuring 1,400.

It was a cold Monday morning in Dearborn – about 11° F, and the weatherman is predicting heavy snow for Tuesday and Wednesday. Stay warm.  Give thanks to God for the “Dearborn Eucatastrophe“. Spread some love and encouragement around your neighborhood.  How will history record what you did today?