You are here: Home / Community / Teacher Seeking Help With Project That Honors Dearborn Men Who Died in Service During Vietnam War

DEARBORN, Michigan – Dearborn lost 70 soldiers in the Vietnam War, most of them fresh-faced young men just out of high school. While the city has historical archives on these soldiers, there is still a lot of information to be found.

Lisa Lark, an English teacher at Edsel Ford High School, has been working hard since June to compile a history of Dearborn’s Vietnam veterans lost while serving our country. She has partnered with the City of Dearborn and the Dearborn Allied War Veterans on the project so that the men will be honored during the Memorial Day Parade. 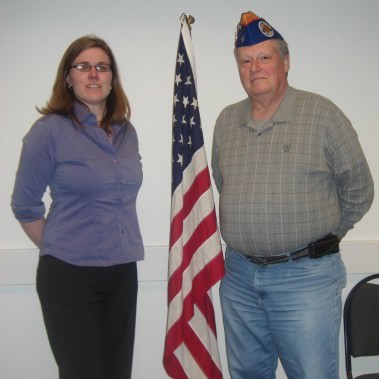 The Dearborn Allied War Veterans Council, represented by Commander Craig Tillman (right), is partnering with Edsel Ford High School teacher Lisa Lark (left) to give special honor to the men from Dearborn who died in the Vietnam War. Lark is spearheading the historical project.

Lark has contacted many of the families of the soldiers who died. Though she has made great progress, her search is part of an ongoing process. She is asking for help from the public, hoping they will share their stories about the men who died, or assist her with contact information for the families.

The project came about because Edsel Ford High School holds a Memorial Day ceremony every year in honor of the 23 Vietnam veterans from the school who died, and curious students began asking Lark, who used to teach social studies, about the men.

She originally planned on looking specifically at former Edsel Ford students but said, “There were so many fascinating stories about students from the other schools that I realized I had to include them all.”

Lark has a student intern helping her out with the project, as well as another interested student who is the niece of one of the soldiers.

She has also received help from veterans and their family members from all over the country, as well as her own family and friends.

“I have been most touched by the families’ willingness to share their stories with me,” Lark said. “They have been so helpful in allowing me to understand who their sons and brothers and husbands were. They have shared photos and letters and tears with me. It has been very humbling.”

She is asking for people who knew these soldiers or their families to contact her so that they can be honored through this project.

“Whether they knew these men well or just sat near them in school, every bit of information will help us to tell their stories. I am also looking for information on where families may have moved to, so I encourage people to get in touch even if they only knew a parent or sibling after the Vietnam Era,” she said.

“Every little bit helps,” she said.

Dearborn Allied War Veterans Council Commander Craig Tillman, a Vietnam veteran, said the DAWVC fully supports the project. The DAWVC had already chosen the theme of the 2011 Memorial Day Parade to be in honor of Vietnam veterans, and is grateful that Lark’s work will enhance the tribute.

“We appreciate Lisa’s dedication to honoring the men from Dearborn who died in service to our country during the Vietnam War,” Tillman said. “Her project really hits home and personalizes Dearborn’s losses. It will add meaning to the day for all those attending, as she turns faceless numbers into real people.”

Lark has compiled a list of Dearborn’s 70 Vietnam causalities. It is as follows:

Anyone with information or willing to provide assistance is asked to call Lisa Lark at 313.410.8477or email at [email protected]

For more information on the project, or visit the Dearborn’s Vietnam Heroes page on Facebook.