DEARBORN, Michigan – David T. Brandon, athletic director for the University of Michigan, will be the keynote speaker at the Dearborn Chamber of Commerce’s Business Builder Breakfast, Tuesday, March 8, 7:30 am at the Hyatt Regency Dearborn. The event is sponsored by Raymond James & Associates. 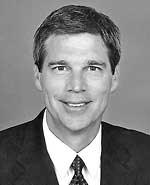 “We are excited to host David Brandon and look forward to learning his motivational lessons in leadership,” said Chamber President Jennifer Knott Giering. “It’s important that we offer our membership access to high level key opinion leaders and we are confident his words will be inspiring.”

After joining Dominos in 1999, Brandon led the pizza giant to becoming the largest quick-service restaurant in history. In 2009, Dominos, with 9,000 franchised and company-owned stores in the US and 65 other countries, had global retail sales over $5.5 billion.

Previously, Brandon served as chairman, president and COO of Valassis Communications, Inc. of Livonia. In his 20-year tenure, the company grew from a family-owned business of 75 employees and $30 million in sales to a publicly traded industry leader with 1,300 employees and a total enterprise value of $2 billion+.

The Chamber’s Business Builders Breakfast in March is one of four such events planned for the year. Previous speakers included Ford Motor Company’s Alan Mulally and Detroit Mayor Dave Bing. Individual tickets are available ($30 for members; $35 for non-members) as well as corporate tables ($400).