DEARBORN, Michigan – Governor Rick Snyder stopped in Dearborn on Thursday afternoon  and gave the state’s tourism industry a significant boost as he signed legislation that increases funding for the popular and productive Pure Michigan campaign.

Snyder asked the Legislature to make adequate funding for this promotion a priority during his Jan. 19 State of the State address. He signed the bill at The Henry Ford museum, one of the state’s top tourist attractions.

“The Pure Michigan campaign delivers results,” Snyder said. “It is an investment that provides a positive return on our tax dollars by fueling tourism statewide. When we tell the rest of the country what Michigan is all about, it is clear that vacationers and job providers begin to see our state as the place to live, work and play. I applaud the Legislature for its swift action in ensuring that this worthwhile program is adequately funded.”

The new law provides Pure Michigan with a more permanent funding stream by establishing Michigan’s 21st Century Jobs Fund as a legal funding source for tourism promotion. It also adds $10 million to the Legislature’s current Pure Michigan appropriation of $15 million for this fiscal year. In addition, the law requires the Michigan Strategic Fund to annually report details of the campaign’s expenditures to the House and Senate appropriations subcommittees that oversee economic development.

The award-winning radio and television promotion highlights Michigan as a travel destination and has generated nationwide praise since its launch about five years ago. However, the campaign has not had a steady and secure funding source.

Snyder also announced that the 2011 Pure Michigan national cable television advertising buy begins Monday, March 14 on 24 cable networks. The budget for this ad buy is $11 million, the largest ever, with $1 million of that coming from the private sector. This is the third year for national Pure Michigan advertising but the first time that private-sector advertising partners are included in the campaign. 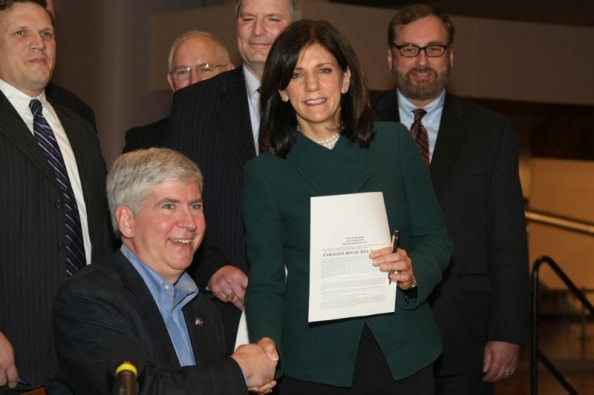 The Henry Ford and Mackinac Island each contributed $500,000 to participate in the national cable advertising, and there will be a commercial about each of them among the Pure Michigan commercials airing nationally. Pure Michigan television commercials will air nationally 4,500 times during this buy, which runs through June on the following cable networks: A&E, ABC Family, Animal Planet, Bravo, CMT, CNN, Cooking Channel, E!, Food Network, Fox, Golf Channel, HGTV, Lifetime, Lifetime Movie, MSNBC, Nick at Nite, OWN, Oxygen, Style, TLC, Travel Channel, USA, WE and the Weather Channel.

Pure Michigan is ranked among the Top 10 tourism campaigns of all time by Forbes magazine. It has enhanced Michigan’s image as a travel destination and has increased the number of leisure trips to the state as well as the amount of spending by travelers and associated tax revenues, according to the Michigan Economic Development Corp.  One private study shows that every dollar spent on Pure Michigan generates more than $3 in revenue for the state.

The legislation, House Bill 4160, is sponsored by state Rep. Wayne Schmidt, R-Traverse City. It is now Public Act 3 of 2011.

“Tourism is a vital component of Dearborn’s economy, and Pure Michigan is helping to drive tourists and their discretionary dollars to our community,” said George Moroz, special assistant to the president of The Henry Ford, in an e-mail invitation send out earlier this week for the signing.