DEARBORN, Michigan – Pastor Terry Jones – the Gainesville, Florida pastor who made international news headlines for threatening to burn a Quran on the anniversary of 9-11 (11-Sep-2010) is headed to Dearborn. He says he won’t burn the Muslim holy book here, but is planning to protest outside the Islamic Center of America in Dearborn on 22-Apr-2011.  Update (8-Apr-2011): The protest will occur in front of Dearborn City Hall.  Update (16-Apr-2011):  The protest by the Order of the Dragon has been canceled. The Terry Jones press conference and “demonstration against Sharia and Jihad” is still set for 22-Apr-2011 at 5:00PM in front of the Islamic Center, although a permit has not yet been issued by the City of Dearborn.

Despite promising on September 11, 2010 that he would not burn a Quran – “not now, not ever” — on Sunday March 20, 2011 Pastor Jones supervised the burning of Quran – which was conducted by pastor Wayne Sapp.

Jones considered the “International Judge the Quran Day” (20-Mar-2011) to be a fairer way of addressing the Islamic holy book, and denied breaking earlier promises not to burn a Quran.

The Quran burning sparked an outbreak of violence in Afghanistan that left 20 dead.  The outbreak of violence poured plenty of fuel on the fire for pundits and commentators like Daniel Pipes writing for Fox News:  ‘Should We Blame a Florida Pastor for Deaths in Afghanistan?‘.  In another editorial Front Page Magazine pleads for sanity:  Destroying One Koran vs. Destroying Many Christians – Which is Worse?

The international news raised more questions about how the Dearborn community will respond.

Closer to home, the Arab American News published a detailed report about a meeting held Wednesday.

About 100 interfaith leaders, community leaders and Islamic center members came together at the Islamic Center of America (ICA) on Wednesday, April 6, to discuss a proper response to the planned visit by pastor Terry Jones of Dove World Outreach Center in Gainesville, Florida to the city later this month.

Jones has said he will likely join a small group called Order of the Dragon from Port Huron in their protest planned for April 22 in front of Dearborn City Hall. The city of Dearborn has not granted a permit to the group to demonstrate anywhere outside city-designated free speech zones.

According to the latest reports, the Dearborn area leaders have “tentatively scheduled an interfaith vigil on Thursday, April 21 at the ICA along with a morning press conference on Friday, April 22 and a community gathering afterward.” 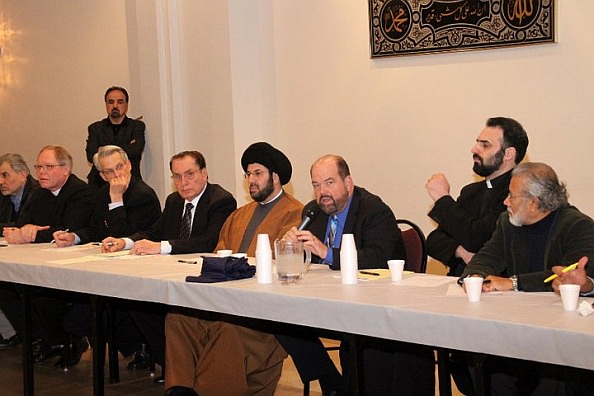 A recent Facebook commenter said we should invite Pastor Jones to enjoy ice-cream at Shatila. Another person chimed in “The masjids need to forget about doing any kind of counter protest. We should have some huge banners on some of the overpasses that say Dearborn Muslims welcome Terry Jones to Warren avenue for Sharwarma and Kunafa.”

A question was posed to members of the Dearborn Area Community Members Facebook forum:  “If you were in charge of designing a banner (welcoming Terry Jones to Dearborn), what message would you want to be written on that banner?”

The following remarks are a few highlights for the suggested signage:

“He obviously wants to generate a reaction and attention. We should completely ignore him. We should also order as many shawarma sandwiches as there are protesters and hand them out to them for free. I am not being sarcastic here, I think it would be a great way to handle this. We need to keep the mosque closed, keep everyone as far away from the protest as possible. Have a group of Muslims come with smiling faces and invite them to our restaurants in Dearborn.”

Rehab Amer said:  “I always believe in turning the other cheek, to show kindness and Mercy of God the Almighty to an ignorant person is a lot more effective than treating him with the same actions as his, it seems he is threaten by the Qur’an! the Qur’an Holds all the names of all Prophets that God the Almighty had sent to mankind to get to know one another, we all are brothers and sisters in Humanity and all Unite under the Name Of God the Almighty who created Heaven and Earth.”

Contrary to many published reports, a protest will probably not occur in front of the Islamic Center of America, but rather in front of Dearborn City Hall.

Mitch Albom devoted a large part of his Tuesday afternoon WJR radio program to talking with listeners about the controversial Pastor Terry Jones. The radio podcast is provided below.

The case of Florida pastor Terry Jones presents Christians with a difficult dilemma. This publicity-seeking pastor of a tiny congregation deserves to be condemned in every way for his act of putting the Qur’an “on trial” and for then burning a copy in a staged act of inflammatory showmanship.  The difficult dimension of this is the fact that even our condemnation gives this pastor what he most desires – public attention…

That is the main issue here, from a Christian perspective. Pastor Jones is not wrong to see Islam as a way that leads millions of people away from the (Good News) message of the Gospel, and thus to spiritual death. But he did not reach out with a (Good News) Gospel message, he simply staged a theatrical stunt intended to draw attention to himself and his church. The way he toyed with the media and major public figures earlier … was an indication of the game he intended to play – and now he has played it out.