DEARBORN, Mich. – The Dearborn Police Department hosted its first, two-day Police Youth Academy on March 26 and April 2, in partnership with the Dearborn Public Schools and the American-Arab Anti-Discrimination Committee. 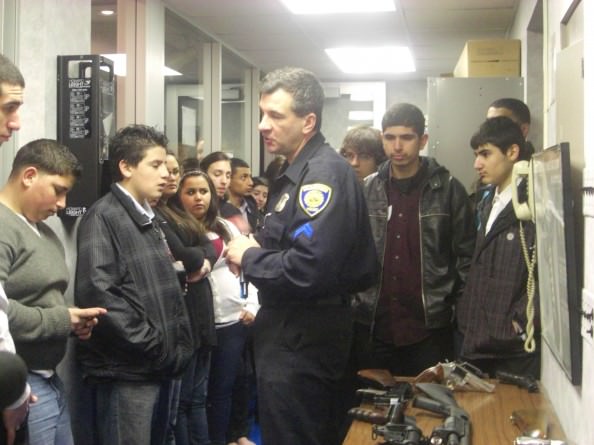 The Dearborn Youth Police Academy included demonstrations of police procedures, special units, and equipment. Here, Firearms Coordinator Steve White shows the students some of the department’s inventory. The successful academy was designed to strengthen relationships between the students and officers.

The academy took place at the Police Department’s headquarters, with about 30 high school students participating from all seven Dearborn high schools, led by a variety of officers and police interns.

The Academy was designed in part to add to the strength of relationships between the community and the Police Department.

Involved students were recommended by their high schools based on scholastic, athletic, or community achievement, as well as intentions on pursing a career in criminal justice. Those participating devoted six hours of two Saturdays to learn about law enforcement.

Sarah Hamad, 16, of Fordson High School, said: “It opened my eyes that the police are very fair and don’t do anything to hurt anybody. They’re there to help.”

A sophomore at Riverside Academy West, Hashem Almeahi, said the program was more than he expected.

“I never knew the Police were this into the community and that they would take their time with us,” he said, adding that he left with a different idea of the Dearborn Police and how they interact with the community.

Charles Cheeks, a freshman at Advanced Technology Academy, said that the program allowed him to “figure out things he really didn’t know before.”

Officers at the Police Department taught students about the history of the Department, the criminal justice system, canines and drug sweeps, internet safety, traffic stops, the value of education and the process of becoming an officer. They were also told about gun control and safety.

Along with the help of Police Department interns, the officers provided demonstrations and made learning fun and interesting, ensuring that students were engaged throughout the course of the day.

“I loved that there were demonstrations of Tasers and guns, and that I learned things I didn’t know,” said Hamad.

Hamad also said that she enjoyed meeting officials, as Mayor John B. O’Reilly, Police Chief Ronald Haddad and Congressman John Conyers were all in attendance at the closing graduation ceremony. 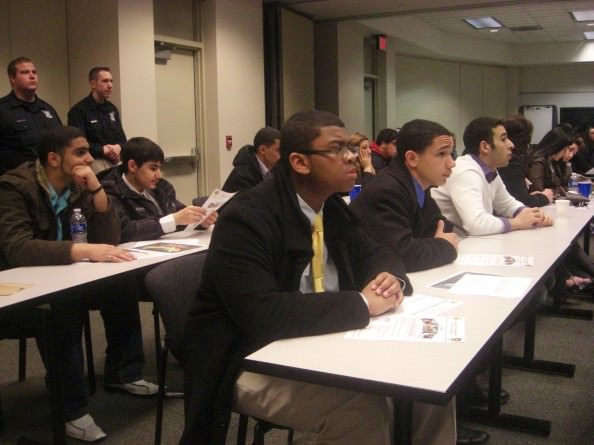 Students from all seven Dearborn high schools participated in the Dearborn Youth Police Academy, learning about the Dearborn Police Department, law enforcement careers and the role of officers as resources for the community.

“It’s good for all our young people and the police,” Haddad stated before the program came to a close. “It gives another dimension to work through to make the community a safer place for everyone.”

Police Corporal Dan Bartok, who helped coordinate the event, agreed with the chief. “It’s great working with the students. It allows the Police Department to foster better relationships with kids in the community and improves partnerships and communication.”

The students most enjoyed learning about the history of the department, the interactions with police officers, and Firearms Coordinator Steve White’s gun control demonstration.

Police Corporal Jerry Blevins, another officer who worked with students, was happy to talk to the young crowd about a future career in law enforcement, and to teach the group about police officers. He felt that he took away from the program, just as the kids did.

“It gives them an opportunity to see what we do, and who we are,” he explained.

“We’re not just someone who drives around in a car anymore. They get to see and understand that we have families, with the same issues their families have, and it shows them that we’re human also. It was a great opportunity to be here,” Blevins said.

Police Lieutenant David Robinson demonstrated this best when he closed the ceremony by telling students, “Understand that we’re in this together, and we’re here for you.”

Bartok said that based on the success of this year’s program, the department plans to make this an annual event. Depending on community support and reaction, it could be held even more frequently.