You are here: Home / Arts / All About the Letter A

A is the first letter of the Alphabet in many of the known languages of the earth. It is naturally the first letter, because it represents the first vocal sound naturally formed by the human organs; being the sound uttered with a mere opening of the mouth without constraint, and without any effort to alter the natural position or configuration of the lips. 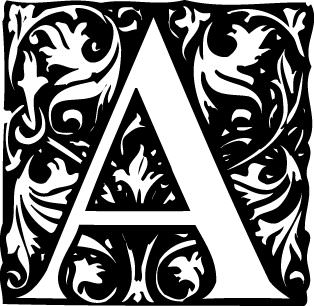 An Artistic Rendering of the English Letter A

The A has been proven to be the first natural vocal sound, and entitled to the first place in alphabets. Hence this letter is found is many words first uttered by infants;  which words are the names of the objects with which infants are first concerned as the breast, and the parents.

Hence in Hebrew am (aleph mem)  is mother, and ab (aleph bet) is father.  In Chaldee and Syriac abba is father;  in  Arabic, aba;  in  Ethiopic, abi; in Malayan and Bengalese, bappa; in Welsh, tad, from whence we retain daddy; in Old Greek and in Gothic, atta;  in Irish aithair; in Abysinian, abba; in Amharic, aba; in several African dialects, baba;  and papa is found in many nations. Hence the Latin mamma, the breast, which is in popular use, the name of mother; in Swedish, amma, is a nurse.  This list might be greatly extended; but these examples prove A to be the first natural vocal sound, and entitled to the first place in alphabets. The Hebrew name for this letter, aleph, signifies an ox or a leader.

A has in English, three sounds; the long or slender, as in place, fate; the broad, as in wall, fall, which is shortened in salt, what; and the open, as in father, glass, which is shortened in rather, fancy. Its primitive sound was probably aw. A is also an abbreviation used before words beginning with an articulation; as a table, instead of an table, or one table. This is a modern change.

“All about the letter A” is derived from Noah Webster’s 1828 Dictionary –  Noah Webster was an American  lexicographer, textbook pioneer, political writer, and editor. He has been called the ‘Father of American Scholarship and Education.’  His name became synonymous with ‘dictionary’.  Webster was  a revolutionary and freethinker.  Webster was a founder of the Connecticut Society for the Abolition of Slavery.  The historic home of Noah Webster is preserved for public viewing at Greenfield Village in Dearborn, Michigan.