DEARBORN, Michigan – As the Dearborn Community prepared for the impact of a protest planned by Florida-based pastor Terry Jones, the Oakwood Healthcare System (OHS) took another step toward celebrating the diversity of its patients, staff and community members. 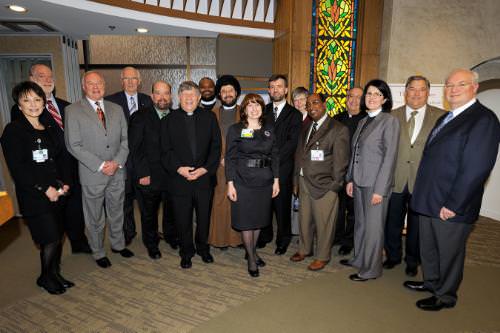 The new space is designed to bring people of all faiths together, according to Michael Geheb, MD, FACP, FCCM, division president of Oakwood Healthcare. It includes religious symbols of significance to people of all the major faiths in the community — and beyond — in a space that can either be shared or separated by sliding glass doors, so that people can worship separately and together at the same time.

“This space was meant to be a uniting space,” said Geheb. “We needed a space where we could all come together.”

The project is several years in the making and started shortly after Geheb came to the hospital and was informed that the existing chapel was too small to meet the needs of the community. Work started on the expansion last October — when Frank Padzieski, who founded the original chapel in honor of his wife, Mary turned 102 years old. The $1.3 million project is being funded entirely through donations. Geheb said it was an important project on many levels, as is the location of the sanctuary. It’s in the geographic center of the building.

“Hospitals are places where people come with great stress, great anxiety — nobody wants to be in the hospital,” said Geheb. “We take care of your physical needs but we’re looking, also, to give you a space where you can personally address your spiritual needs.

“The spirit of healing needs to be at the center of the hospital,” he added. “No matter where you come into the hospital and you walk through it, you will encounter this space and it will invite you to come in.”

The committee that took on the project was comprised of individuals of different beliefs, background, race and ethnicity.

William Abbatt, a Dearborn resident who served on the capital campaign committee, said he was pleased to be involved with the project and awed at the way it turned out.

“The friends and the family serve as a support group to the patient. The sanctuary serves the friends and family directly and the patient indirectly because the stronger the support group the more effective it can be,” said Abbatt. “The need for something like this is often unappreciated until you’re personally touched by a situation.”

The project expanded the old chapel from about 650 square feet to more than 1,000 square feet, and includes stained glass windows that celebrate multiple faiths. There is seating for up to 100 people. Still planned is an obelisk near the entrance that will include the word ‘God’ in all faith languages of the world and in every human script.

“Our intent is to make something that people are drawn to,” said Geheb. “They can touch it; they can feel it; and they can identify with it.”

The Rev. Tony Marshall, chaplain at Oakwood, said he thinks the Sanctuary sends a message that is sorely needed in this day and age.

“With all the wars and fighting and divisiveness, separation amongst race, ethnicity and religion, our God took some Christians and Muslims and Jews, Hindus, Agnostics, Athiests, Buddhists — we all sat at the table together with one common plan: to create a holy and sacred place for people that are hurting,” said Marshall. “I wish we could take this message to the far ends of the earth to say that when we work together, we really can get it right.”