DEARBORN, Michigan – Vanguard Voices, directed by G. Kevin Dewey, will present its Vanguard Premieres concert on Saturday, May 21 at 8 p.m. at the Michael A. Guido Theater, 15801 Michigan Avenue, Dearborn. Reserved tickets for the concert are $12 and $8 and are available from the Ford Community and Performing Arts Center box office at (313) 943-2354.

The concert will feature two winning and four honorable mention compositions from the fourth Vanguard Premieres Choral Composition contest, which received 105 entries from composers of 15 nationalities and 13 different countries. 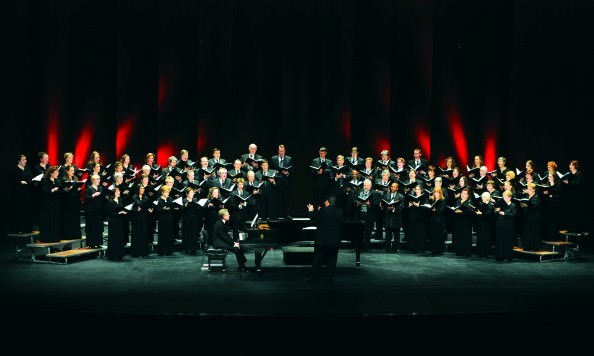 The winning compositions are The Divine Image by Frank La Rocca (California) and Sicut Cervus by Mark Buller (Maryland).

Composer biographies, notes about the compositions, and additional information about Vanguard Voices and Vanguard Premieres are available at www.vanguardvoices.org.

In its eight-year existence, the Vanguard Premieres program has introduced 35 new choral works, including the six selections to be premiered on May 21.

Vanguard Voices, established in 1992, is sponsored by the Dearborn Recreation Department, and is choir-in-residence at Henry Ford Community College. The members of the 65-voice mixed chorus enjoy singing a cappella, with Vanguard Brass, and with area symphony orchestras.