You are here: Home / Business / Classic Vehicle in Violation of City Ordinance?

DEARBORN, Michigan – If you drive down Cherry Hill Road in west Dearborn, it’s likely you’ve seen the “Beast,” an affectionate name for the classic 1968 C10 Chevrolet panel wagon parked in the driveway of Peder and Margaret Blohm’s residence.

According to the Blohms, they received notice that the “Beast” was considered a commercial vehicle as part of the City’s recent enforcement of the ordinance regulating commercial vehicles parked in residential neighborhoods. 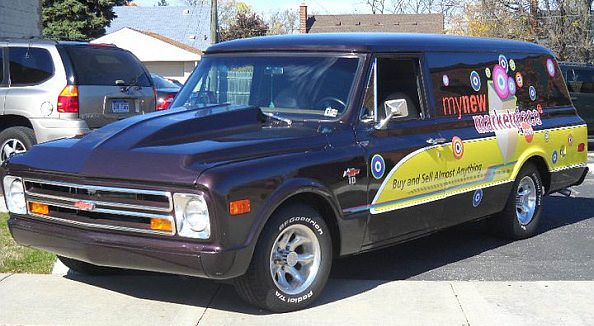 Notice of the violation was posted on the couple’s front door and signed by a Building and Safety field inspector, requesting that they contact the inspector as soon as possible.

Blohm readily admits that the vehicle has colorful and specially designed graphics for a member-based website, MyNewMarketplace.com, that he is part owner of and which helps to connect buyers and sellers nationwide.

“This is where things get fuzzy,” said Blohm, who asked the inspector if he were to purchase a $300,000 Bentley, put graphics on the doors, and keep it parked in his driveway, would it be considered a commercial vehicle. The inspector quickly replied “yes.”

When Blohm questioned if the size of the graphics made it a commercial vehicle, the inspector insisted that the size didn’t matter. Blohm ended the conversation after the inspector said that if Blohm continued to park the vehicle in his driveway, the City would fine him and he’d be taken to court. “The judge would decide.”

Since then, the Blohms have received a notice of violation and were given “two days to remove an illegal vehicle from the property.”

Shortly after the first notice, Blohm started to research State and City ordinances.

The State of Michigan defines a “commercial motor vehicle” as one designed to transport 16 or more passengers, a motor vehicle having a gross vehicle weight rating of 26,001 or more pounds . . . however, the state not include a vehicle used exclusively to transport personal possessions or family members for non business purposes.

While the City of Dearborn’s ordinance has no clear definition of a commercial vehicle, Sec. 18-356 regarding parking of commercial vehicles includes, “This section shall not apply to pick-up trucks and vans utilized as family vehicles and which bear no commercial message, logo, symbol or equipment.”

Blohm agrees that the graphics on his vehicle appear to be the sticking point. At the same time, he reasons that the City’s ordinance could be applied to vehicles that have car license plates framed with dealers’ names, sports decals, Detroit D, political messages and more as he was told as the size or type of graphic or decal doesn’t matter.

The Blohms’ greater concern is the lack of courtesy and customer service from the Building and Safety department.

“The inspector can’t be faulted for the fuzziness of the regulations, but the attitude of ‘enforcement’ rather than customer service presents a bigger problem for the City and seems to be part of the culture,” said Blohm. “I was never asked what kind of work I do, how I use the vehicle or offered any alternatives.”

Blohm learned from others that he could pay $50 and apply to the Traffic Commission for an exception, which he has done. All of the Blohms’ surrounding neighbors signed the petition, who were amazed that the vehicle was cited. Around the neighborhood, it’s known as the vehicle that makes you smile.

“My wife and I love Dearborn or we wouldn’t continue to live and work here,” said Blohm. “We appreciate all the City services and agree that maintaining your property and safety is foremost. However, this seems ridiculous. During times when people are struggling to pay their bills and working from their homes; taking on second or third jobs, wouldn’t it be more reasonable to have the City concentrate its resources to help homeowners, self-employed workers and businesses stay here?”