DEARBORN, Michigan – The public is invited to attend the Veterans Day Ceremony at 11 a.m. on Friday, November 11 in the Council Chamber of City Hall, 13615 Michigan Avenue (corner of Michigan and Schaefer).

The ceremony will especially honor Navy veteran Richard Fleek, who is Dearborn’s Veteran of the Year. Leading the program will be newly installed Dearborn Allied War Veterans Commander Tom Wilson.

“Veterans Day is our chance to offer a sincere thank you to those who serve and protect us. Dearborn has a long tradition of supporting these men and women,” said Mayor John B. O’Reilly.  “I encourage our residents to show their appreciation, then continue to honor and help veterans throughout the year,” said Mayor O’Reilly, who will also speak at the event. 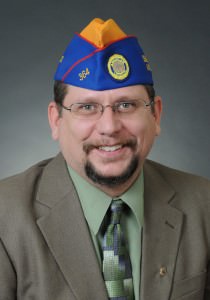 Fleek said he is humbled by those who nominated him and thanks the DAWVC Veteran of the Year selection committee for the recognition. “I’m awe-struck and speechless at the honor,” he said.

Following the ceremony, an Open House will take place till 2 p.m. at American Legion Post 364, 3001 South Telegraph, Dearborn.  For more information, please call the Department of Public Information at 313-943-2285.

Among his other volunteer contributions, Fleek is the commander of the VFW Lt. Archie Kelly Post 2107, serves on the executive board of the American Legion Post 364, is a member of the Catholic War Veterans and is the adjutant for the Dearborn Allied War Veterans Council. In 2009 – 2010, he served as the DAWVC Commander.

In honoring a Veteran of the Year, the DAWVC raises awareness of the tireless volunteer efforts of local veterans and thanks them in a meaningful way through mentor, peer and community recognition.

Ted Gagacki, who nominated Fleek and is the 2003 Veteran of the Year, said of his fellow veteran, “I’ve known Rich since he first walked into the Legion. I like the way he conducts himself. He is a calm professional who steps up and works for the betterment of his family and our post. He’s dedicated many hours towards veterans’ causes.

“Rich’s heart has always been with the veterans he serves,” Gagacki continued. “He’s raised money and morale and changed the community for the better by the introduction of the dignified and long deserved Memorial Day funeral procession for veterans who died without resources and whose ashes were left sitting on the shelves of local funeral homes. I’m impressed with how he and others continue to work tirelessly for that cause.”