DEARBORN, Mich. – A face to every name.  That’s the desire of the Vietnam Veterans Memorial Fund (VVMF), which seeks to remember each American lost in the war as an individual by showcasing photos of them. That mission also describes the challenge accepted by Dearborn teacher Lisa Lark. 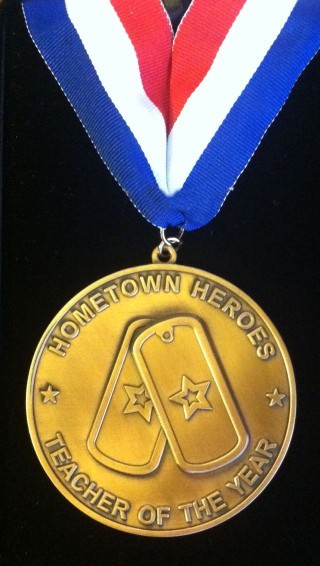 This is the Hometown Heroes Award presented by HISTORY Channel and Vietnam Veterans Memorial Fund to Dearborn teacher Lisa Lark.

In May 2010, she began an initiative to put a face to every Dearborn Vietnam War casualty. Since then, her efforts have expanded across several states.

She was honored for her work at a prestigious gala in Washington, D.C. on Veterans Day.

Lark, a teacher at Edsel Ford High School, was presented with the Hometown Heroes Award by the HISTORY Channel and the VVMF at a benefit to raise money for the Education Center, which will be a companion facility to the Vietnam Veterans Memorial (The Wall).

Lark’s project to find details and photos of every Dearborn man lost in the Vietnam War included a partnership with the City of Dearborn and the Dearborn Allied War Veterans Council (DAWVC) during the city’s 2011 Memorial Day parade.

During the parade, each military, veteran or community group carried a sign with a photograph and military service information for each of the 70 Dearborn men lost. In conjunction with Mayor John B. O’Reilly, she also extended invitations to the families to attend the parade.

One of the special guests in Dearborn’s Memorial Day parade was VVMF representative Adam Arbogast.

He appreciated the care taken by the DAWVC, the City of Dearborn and Lark in remembering these fallen service members. Lark presented a DVD containing photos and biographies of the men from Dearborn to Arbogast for use by the VVMF.

That’s where talk of a partnership began.

Arbogast and the VVMF asked Lark, who until then had concentrated her research on the 70 men from Dearborn, to lead a campaign to gather photos for each Michigan name on the The Wall in Washington. Now, she’s also taken on finding images from Indiana and Ohio.

Lark’s work with the VVMF is part of a nationwide initiative to collect a photograph for each of the 58,272 men and women whose names are inscribed on The Wall. To date, she’s located 1,100 photos.

As part of her honor in Washington, Lark and her former student, Michelle Kerr, were also on stage at a special Veterans Day ceremony at The Wall. The ceremony was attended by thousands of Vietnam veterans and their families.

“It was such an honor to be there. It’s an amazing thing that’s happened, being able to speak with all these families. It’s very exciting,” Lark said.

The VVMF, the organization that initially raised money to build The Wall, is fundraising now to construct the companion Education Center, which will feature these images, tell the story of these service members and educate visitors on the value of service in America’s armed forces. It will also add to the history of the Vietnam War.

The collected images will also appear on the VVMF’s online Virtual Memorial Wall.

The awards dinner at the Capital Hilton on November 11 was a benefit for the Education Center, which expects a groundbreaking on the National Mall in November, 2012.

The evening honored individuals who have been “visible, vocal and generous in their effort to bring greater awareness of the values of loyalty, duty, courage, and service.”

The Hometown Heroes program and award that Lark received is designed to encourage young people to learn about those who sacrificed their lives in Vietnam and preserve stories about all those who served in Vietnam.

Other awards were presented to Chuck Hagel, a former U.S. Senator, for his service in Vietnam and dedication to his country and the VVMF, and Joseph Galloway, an acclaimed war correspondent.

Galloway, who was the only civilian to be awarded the Bronze Star for Valor by the U.S. Army during the Vietnam War and co-authored the book “We Were Soldiers Once….And Young, was honored for his tireless dedication to veterans and their families.

Lark said, “It was overwhelming and moving. Just to hear my name mentioned alongside these other great Americans. I think, ‘who am I?’ I am so blessed.” 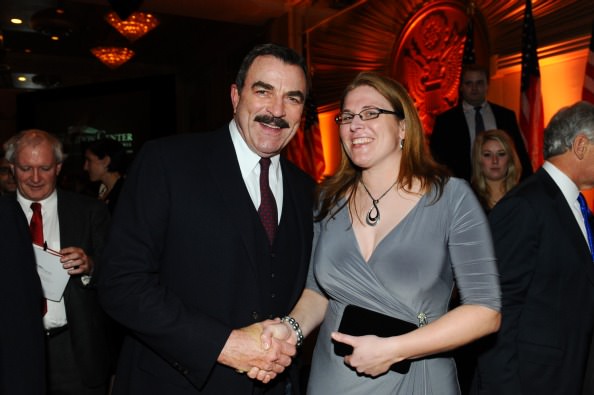 The 2011 Build the Center Benefit Gala included members of Congress, the armed forces, veterans, and philanthropic leaders. The speaker and host was Tom Selleck, the award-winning actor and VVMF national spokesperson. The event exceeded its goal of raising $1 million.

While Lark is proud of the medal she was awarded, her hope is that it raises awareness about Vietnam veterans and their sacrifices, and encourages others to get involved in the VVMF project.

“If you have a story about someone who fought and died in Vietnam or if you have a picture, please contact me by email or phone,” she said.

“I’ll see that they become part of the history of that conflict on display in Washington, D.C. I also want people to know that I couldn’t have done this without the support of veterans, their families and friends, and I especially want to thank those veterans groups that so recently helped fund our stay in the capital. Vietnam Veterans of America Chapter 267, Dearborn Allied War Veterans Council, American Legion Ford Motor Post 173 and AMVETS Post #4 made sure we didn’t have any out-of-pocket expenses,” she said.

“All along they’ve been supportive and that hasn’t changed. They are selfless, patriotic and should not be forgotten.”

Anyone with information or willing to provide assistance is asked to call Lark at 313.410.8477or email her at [email protected]

Additional information about the VVMF is available and details about the collaboration with the History Channel are available here.