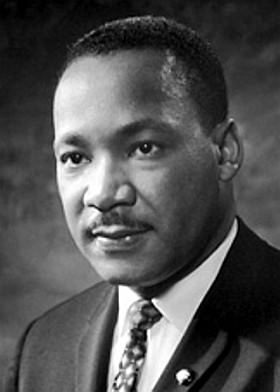 Martin Luther King, Jr. was an American clergyman, activist, and prominent leader in the African-American Civil Rights Movement. He was an iconic figure in the advancement of civil rights in the United States and around the world, using nonviolent methods.

In 1961, King might have been no more welcome in Dearborn than Terry Jones was in 2011. However, in 1964, King became the youngest person to receive the Nobel Peace Prize for his work to end racial segregation and racial discrimination through civil disobedience and other nonviolent means. King was assassinated on April 4, 1968, in Memphis, Tennessee.

Martin Luther King, Jr. Day was established as a U.S. federal holiday in 1986.

During this years remembrance celebration, voices from around Dearborn will sing under the direction of Kevin Dewey. Also expected to be in attendance are Dearborn Mayor John (Jack) O’Reilly and Dearborn Heights Mayor Dan Paletko.

Following the Interfaith Service, there will be a social featuring food representing various ethnicities in the Dearborn area. Everyone in the greater Dearborn area is invited to attend.

For more information about the Dearborn area Interfaith Service planned for January 15th, please contact Father John Cramer via e-mail at [email protected] or by phone at 313-561-5233.

An excerpt from Martin Luther King’s speech in Washington, DC on May 17, 1957:

We must meet hate with love. We must meet physical force with soul force. There is still a voice crying out through the vista of time, saying: “Love your enemies, bless them that curse you, pray for them that despitefully use you.” Then, and only then, can you matriculate into the university of eternal life. That same voice cries out in terms lifted to cosmic proportions: “He who lives by the sword will perish by the sword.” And history is replete with the bleached bones of nations that failed to follow this command. We must follow nonviolence and love.

An excerpt from Martin Luther King’s speech in Oslo, Norway on December 10, 1964:

I accept the Nobel Prize for Peace at a moment when twenty-two million Negroes of the United States of America are engaged in a creative battle to end the long night of racial injustice. I accept this award in behalf of a civil rights movement which is moving with determination and a majestic scorn for risk and danger to establish a reign of freedom and a rule of justice…

After contemplation, I conclude that this award which I receive on behalf of that movement is profound recognition that nonviolence is the answer to the crucial political and moral question of our time — the need for man to overcome oppression and violence without resorting to violence and oppression…