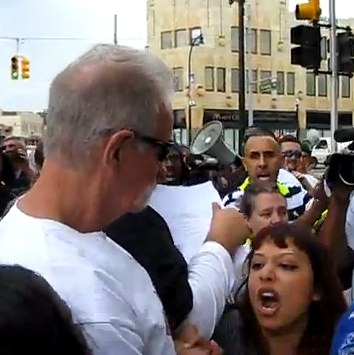 Using Dearborn’s City Hall and Schaefer Road as a stage for their antics  (and attempting to grab international news headlines) – a small group supporting Terry Jones group ‘Stand Up America Now!’ tried to walk down Schaefer Road – against the shouting and shoving of the Detroit area anarchist group ‘By Any Means Necessary’ (BAMN).

Terry Jones tried to bring forward five points (according to his press release) in his speech at Dearborn City Hall:

The general rally went very good. We were very pleased with that. We knew that we would definitely be met with some opposition. That happened the very first time that we came to Dearborn, the second time, and now here the third time where people were very unruly, yelling and screaming. The last time we were here, they threw bottles of urine at and shoes at us. This time they were cussing, yelling and making it very hard for us to have a peaceable assembly as the First Amendment guarantees us. That was very disturbing in that sense. We were absolutely devastated or shocked at the reaction of the counter protesters as we just wanted to march peaceably on the sidewalk down to the Arab festival. We had made our intentions very, very clear that we were going to be peaceful. We were met with very much aggression. People got in our faces, they yelled at us, they cussed us. They attacked us! We were hit, we were assaulted, we were pushed to such a degree that the police came to me several times requesting that we stop our walk.

We were very surprised! We consider it to be a very serious state that our nation is either in or headed toward when you have declared peaceful intentions of simply walking on the sidewalk and you are attacked in that sense. I’d like to again emphasize we’re very shocked that we were attacked and hit. We were pushed even to the extent that when it was all over, the police came to us and they said, “Ok, you all have been assaulted. Do you want to press charges?”. We decided at that time not to press charges, but we were indeed very shocked.

The actions of the counter protesters did not serve as any type of a deterrent. We will proceed on with our message. We will be heading next week to New York City. After that we will be going to Chicago. We will be spreading our message and our concern about the radical element of Islam.

Meanwhile, back at the Arab Festival local residents and guests enjoyed dancing, entertainment, fantastic food, and music throughout the weekend.

Evangelists with Acts17 (and several other Christian groups) – perhaps emboldened by winning several lawsuits that guaranteed their right to proselytize at the festival claim to have peacefully distributed 30,000 pamphlets on topics like “the Diety of Jesus Christ, the reliability of the Gospel accounts,  and the truth about Mohammed“.  In addition, local residents (from Dearborn and surrounding communities) quietly and peacefully distributed 20,000 flyers in English and Arabic entitled God is Not Silent.