You are here: Home / Buzz / Mayor Praises Community for Response to Terry Jones

DEARBORN, Michigan – Mayor John B. O’Reilly, Jr. said he was proud of the Dearborn community for tempering their response to Terry Jones when he appeared at City Hall last Friday. 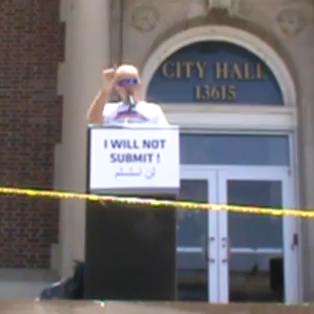 Mayor O’Reilly had joined with Dearborn religious and community leaders last week in urging a calm response to the controversial figure. Together, they asked for the focus to be on peace and tolerance, and it appeared that Dearborn residents were of the same mind. Few residents appeared to be among the 50 or so that showed up at City Hall while Jones was speaking.

The counter protestors were dominated by members of By Any Means Necessary (BAMN), a Detroit-based group whose confrontations with Jones have been its only known connections to Dearborn.

There were six arrests as Jones began his announced march from City Hall on public sidewalks towards the Arab International Festival on Warren Avenue, but those arrested appeared to be BAMN members. Only one of the six people arrested was from Dearborn.

There were no injuries. Jones and his supporters refused to press charges so those arrested were charged with the misdemeanor of breach of the peace.

The arrests occurred after Jones and a handful of supporters were confronted by angry counter protestors apparently led by BAMN, who crowded the public sidewalks, impeding movement and forcing people onto Schaefer Avenue.

Shouting and shoving occurred. Police reacted quickly, got Jones and a few supporters into a vehicle, and took them away from the scene. Jones and his supporters said they would no longer go to the Arab Festival where they had planned to speak. The police took them back to where their vehicles were parked.

The mayor said neither Jones, who is the leader of the Stand Up America Now group, nor BAMN have any long-standing connection to the Dearborn community.

“The activity we saw today was essentially between two outside organizations with no real stake in Dearborn,” said Mayor O’Reilly.

This week, prior to Jones’ appearance, the Mayor had said, “Neither of these invading groups will achieve the outcomes they desire if we focus on peace, tolerance and forgiveness.”

While urging residents to concentrate on a peaceful response, the City had focused this week on creating an environment in which freedom of speech could be exercised and everyone’s Constitutional rights respected.

“I am proud of our Dearborn residents and thank the religious and community leaders for carrying the message of peace and tolerance,” said Mayor O’Reilly.

He also praised the Police Department for their professionalism in preparing for and managing the difficult situation. Police Chief Ronald Haddad agreed. “I am proud of the fine men and women of the Dearborn Police Department, who along members of the Michigan State Police and the Western Wayne Mobile Field Force, answered the call of duty today. Their professional actions reflect their commitment to protecting the public and their rights,” he said.