DEARBORN, Michigan – Representatives of the Michigan fraternity – Order of the Dragon (OOTD) – met with the Dearborn mayor and a small group of Dearborn area religious leaders on Saturday morning (April 16) to discuss Sharia law, “soft jihad”, and mis-perceptions of the Dearborn community. After the meeting, Mr. Frank Fiorello, President of OOTD, indicated they were cancelling the protest planned for Friday, April 22nd in front of the Islamic Center of America.  Pastor Terry Jones, however, is still scheduled to make an appearance.

Mr. Frank Fiorello was invited by Dearborn Mayor Jack O’Reilly and Police Chief Ron Haddad to meet in Dearborn and discuss a realistic perspective of the Dearborn community. 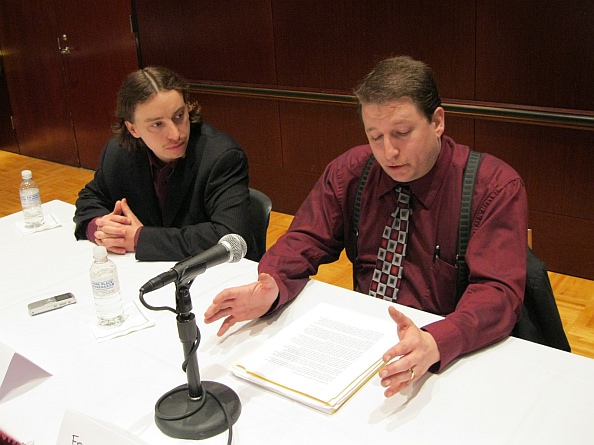 Mayor O’Reilly said, “I extended to Mr. Fiorello the same invitation I extended to Sharron Angle in Nevada to visit Dearborn and he accepted… I was very happy that Mr. Fiorello accepted our offer and found him to be an intelligent and reasonable person. We discussed the history of Muslim participation over 80 years in Dearborn and assured him that Islamic religious law (Sharia Law) is not applied to any civil activities or legal decisions in Dearborn.”

“There is no Sharia law in Dearborn or anywhere else in the United States. I mean it’s not a conversation to be had. It’s ridiculous.” said Michael W. Hovey, coordinator of interfaith relations for the Roman Catholic Archdiocese of Detroit.

At Mr. Fiorello’s request, Mayor O’Reilly arranged a meeting for Mr. Fiorello to meet with faith leaders representing a variety of religions in the Dearborn community on Saturday, April 16, 2011.

The Order of the Dragon was formed to “protect the traditional rights of Americans and …  and protect our country from the rise of radical Islam and the implementation of Sharia law.”  Mr. Fiorello wants to “stop Islamic colonization” and said his principles are based on the ideas of Thomas Jefferson, Ben Franklin, Thomas Payne and  “the writings of the founding fathers”.

The Mayor said, “It was not difficult (to arrange the meeting) since the Dearborn Area Ministerial Association meets regularly to support activities and success of all faiths in the community.”

Mr. Fiorello met in a ‘road table discussion’ with the area religious leaders for about two hours on Saturday morning (April 16, 2011), and then met with press representatives at the Ford Community and Performing Arts Center (Civic Center) to discuss the results of his meeting in Dearborn. 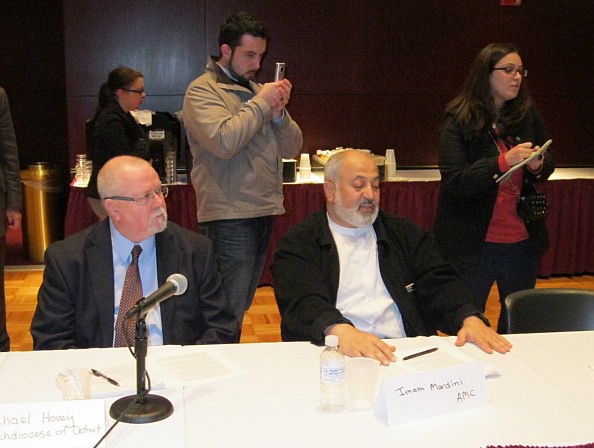 Seated left to right: Michael Hovery of the Archdiocese of Detroit and Imam Mohammed Mardini

More photos of the meeting can be found on the Dearborn Free Press – Facebook page.

Mr. Fiorello said, “The Order of the Dragon originally posted the Facebook notice of our intent to have a peaceful protest of what we believed is a ‘Constitutional concern.’ I had selected the (original date for a protest) based on events in Washington and elsewhere without realizing it would be Good Friday. The Order of the Dragon was the first organization to submit a petition to hold a demonstration in front of the Islamic Center of America in Dearborn.”

Dearborn Police Chief Ronald Haddad said, “Frank engaged with the Police Department throughout the review of his petition to hold the event in front of the Mosque. It was apparent that he was reasonable and his concerns arose from information he had been exposed to on the web.”

The Islamic Center is located on a street with a row of Christian churches where many Christians will be attending Good Friday services. The Chief went on to say that Mr. Fiorello understood the difficult logistical issues related to the Islamic Center of America.

Terry Gallagher of the Interfaith Leadership Council of Detroit urged attendees to sign a petition and join in a prayer vigil set for Thursday.

In the sound clip above,  Mr. Fiorello briefly mentions a deposition regarding Terry Jones, which was recently investigated by CBS Evening News.

Mr. Fiorello added:  “I personally believe that  Islam is a bad idea and  some people are trying to find good ideas in there…”

Even though Fiorello’s group canceled their protest scheduled for Friday, April 22nd, and Fiorello condemned the  Quran burning of  Terry Jones — Fiorello had very few kind words for the prophet Mohammed (and we won’t repeat them here) — indicating that Mohammed was a false prophet — although Jamie Bothwell, Vice President for the Order of the Dragon (OOTD) was quick to point out that OOTD members held a variety of opinions about Mohammed.

Fiorello wanted to make sure he was on record as saying:  “I don’t believe there is any Sharia law in Dearborn.”

In related news, Judge Mark Summers has ordered Pastor Terry Jones to appear in Dearborn’s 19th district court to answer prosecutors’ claims that his planned protest of the Islamic Center of America could spark violence.

“Prosecutors want a ‘peace bond’ from Jones to pay for additional police officers during his demonstration outside the mosque. The complaint doesn’t specify an amount, but Jones has said Dearborn police want him to pay $100,000 in overtime costs.”

According to a report in the Detroit Free Press, “Muslim leader Dawud Walid, head of the Michigan Council on American-Islamic Relations, criticized the court filing, saying it actually aids Jones’ cause.”

Walid said he disagrees with prosecutors because “their action innocently played into Jones’ objectives, which is to paint Dearborn as a pro-sharia city that’s oppressing Christians, which is of course not true.”

Walid also said that the court filing inaccurately tries to “equate the actions of zealots in Afghanistan with Muslim-Americans in Dearborn,” which he described as a peaceful community that would not harm Jones.