DEARBORN, Michigan – Dearborn attorney and former magistrate Sam Salamey has received a major endorsement in his 2012 campaign run for judge of the 19th District Court in Dearborn. 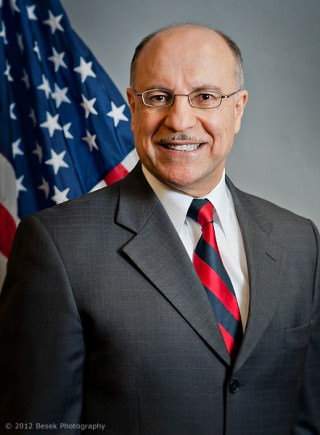 “I have known and worked with Sam Salamey for many years in Dearborn,” Mayor O’Reilly said. “He has outstanding character and a passion for fairness in the practice of law. As a Dearborn District Court Magistrate, Sam pursued the facts in a respectful but thorough manner always pursuing the truth. I can honestly say that as Judge, Sam Salamey will be dedicated to insuring that the Dearborn Court serves the best interests of everyone in Dearborn,” he added.

Salamey said the mayor’s endorsement is a major plus for his campaign.

“I am very pleased and honored to receive Mayor O’Reilly’s support,” Salamey said. “Business and community leaders across Dearborn have not been pleased with how their court has been functioning. There have been many lawsuits filed against the court, causing a drain on taxpayer dollars. In addition, the court’s internal fighting and bickering has created tremendous turmoil and impacted the court’s operations. All of this disarray has damaged the court’s reputation and the city’s image,” he added.

As judge, Salamey said he would focus on restoring respect and improving the efficiency, professionalism and integrity of the court.

The 19th District Court, one of the busiest in Michigan, is served by three judges elected in staggered election process; one of the judges — is up for re-election in 2012.

A longtime Dearborn resident, Salamey operates his own law firm in the city. He previously served as magistrate for the court for 14 years. Salamey is very active in the community, having been appointed by Mayor O’Reilly to the Board of Ethics and elected by the Board as its chairman.

“My current and past experience has given me a strong perspective on the inner-workings of the court,” Salamey said.

Salamey has an impressive and impeccable record of interaction with Dearborn and its residents, he began his work career in Dearborn early, at the age of 15 as a party store clerk in the south east corner of the city, at 18 he began working with the Dearborn Police Department as a community relations liaison. He then took a job as an instructional technician with the Dearborn Board of Education while at Fordson High School (1983-1985), while attending college. He received his bachelor’s of arts degree from Wayne State University and his law degree from the Thomas M. Cooley Law School in Lansing in 1985.

Salamey is also active with many civic, educational, charitable and humanitarian organizations with special emphasis on Dearborn.

Salamey’s professional career spans over 25 years of practicing law in the community, a career so diverse which saw him serve as a Prosecuting Attorney, Criminal Defense Attorney, Business and Corporate Practitioner and 14 years of judicial experience as a Judicial Magistrate of the Dearborn Court.

“The role of our court is to dispense justice, but it is not doing justice for the City of Dearborn or its Citizens,” Salamey said. “I am committed to changing that. I am committed to the efficient, unbiased and fair administration of justice and to clean the terrible mess inflicted on the Court’.

The Salameys are lifelong Dearbornites. The Salameys’ three boys have all attended and graduated from Dearborn Public Schools and were honor roll Students. Their daughter is currently a 10th grader at Dearborn High.