You are here: Home / Community / Letter to the Editor – Are we being bullied?

It’s gratifying to read in recent months that anti-bullying campaigns have been launched nationwide— including Dearborn Public Schools. Years ago, I was in disbelief when I learned one of my daughters was being bullied by other girls at Lindbergh Elementary. It prompted family discussions about how to stand up to bullies and a phone call to one of the moms. Finally, upon my daughter’s graduation from Dearborn High, she received an overdue apology from one of the girls. Better late than never!

Fast forward a few years with no kids at home—my husband and I suspect we are being “bullied.” It’s not our neighbors or anyone we know, so it feels even more threatening.

On top of that, we’ve been cautioned not to speak up with warnings of “don’t fight City Hall” or “pick your battles carefully” from neighbors with rental properties, local business people who have to deal with the City and others who live or work in Dearborn. 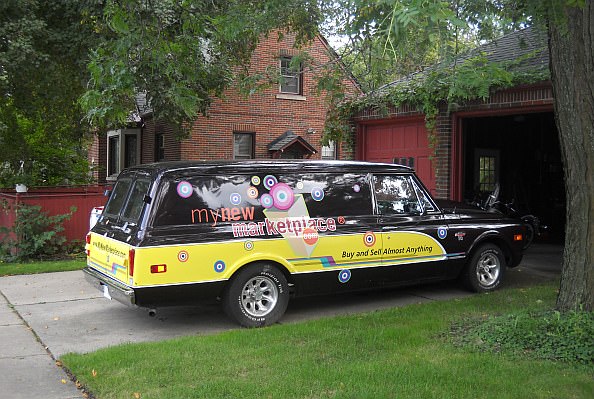 Our situation started with a “notice of violation” (not a fine) from the Residential Services Department on September 16, 2011 about removing an illegal, commercial vehicle from our property. This prompted my husband Peder to contact the field inspector who insisted we had a commercial vehicle. The vehicle in question is a customized, classic1968 C10 Chevy panel wagon that my husband uses as a daily driver, to car shows and cruises during the summer and has vinyl graphics on the outside for his website, MyNewMarketplace.com.

In truth, it’s a colorful vehicle that we call “The Beast.” However, it’s not “commercial” according to our usage and to state and local law. With the exception of winter months when it goes into hibernation, it’s parked in our private driveway accessible and visible from Cherry Hill.

To make a really long story, short — Peder applied for an “exemption” through the Police Department to keep the “Beast” parked at our residence, obtaining signatures from all of the surrounding neighbors. Then the traffic commission invited him to a meeting and unanimously agreed that it wasn’t a commercial vehicle, so an exemption was not granted. They added, “It’s up to the City’s legal department to prove it is.”

When the City realized it’s not a commercial vehicle, the City then claimed it was against the signage ordinance as they saw it as a “rolling billboard.” When they realized that didn’t apply, the final attempt is now it is a public nuisance.

We received a citation by mail to call the Court, and then a notice to appear for an “arraignment” on misdemeanor charges for a “public nuisance.” This is a criminal charge! Because the house is titled in my name, yours truly must respond “Guilty” or “Not Guilty.”

Obviously, we’ve made someone very mad to go to all this effort, time and expense with taxpayer money. We’re both self-employed entrepreneurs and small business owners who think “out of the box.” We love Dearborn, but we don’t like this feeling of being “bullied” or “boxed in.” If we tell our kids to stand up for themselves against bullies, we have to stand up, too! That may make us different, but hopefully a jury will decide we’re not a “public nuisance.”

After two pre-trial court hearing dates, where the City’s only offer was “Plead Guilty and pay up to a $500 Fine” or 90 days in jail, so we’re standing our ground. We’ll be in court at 8:30 a.m. on Friday morning, March 30, 2012 for a jury trial in 19th District Court with Judge Hultgren.

If you agree this is outrageous, we welcome your support on Friday. Join us in court!
Sincerely,