DEARBORN, Michigan – Joined by a large group of enthusiastic supporters at her home in Dearborn, Karen Jacobsen  announced her campaign for Michigan’s new 12th Congressional District against John Dingell. 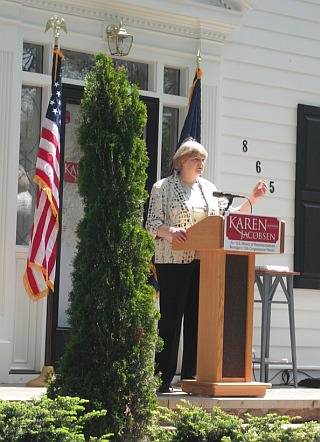 Yesterday, John Dingell, the longest currently serving member of the House, kicked off his campaign for re-election. According to AnnArbor.com, “He says in an email to supporters that he’s running because voters ‘deserve’ an environmental watchdog and someone to fight for the preservation of Social Security and Medicare and access to ‘quality health care’ ” (AnnArbor.com, May 2, 2012).

Karen responded by saying to supporters, “Mr. Dingell epitomizes the meaning of ‘career politician.’ This rhetoric is the same tired response we are used to hearing out of Washington.”

“Voters have a clear choice. If you believe our government is too big, that deficit spending is out of control and that career politicians no longer work for us, then I ask for your support. Our window of opportunity to reverse the course of this country is at a crisis point. If unchecked, Washington will continue to spend, borrow, tax, and print worthless pieces of paper. We have to stop this. I am running for Congress to tackle the most difficult problems facing our country. My campaign is about arming the people of Michigan with new information, new ideas and offering them the opportunity to elect a real advocate who will represent them in Washington.”