DEARBORN, Michigan – A group of anti-Islamic protesters, led by Ruben Israel of the official street preachers used a pig’s head on a pole as a “conversation starter” at Dearborn’s 17th Annual International Arab Festival on June 15th.  Some local Christians and Muslims were offended by the pig’s head on display, while many others were incredulous and could not believe it actually happened. Photos provided by Richard Abdullah reveal more details about the incident. 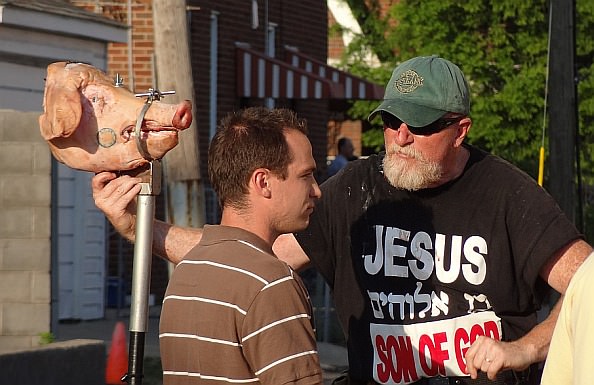 A smoldering fire in the blogosphere continued to spark outrage and controversy in Dearborn and around the country this past week – after The United West released a YouTube video entitled American Muslims Stone Christians in Dearborn, MI on June 26.  (The video had 405,000 views on Friday morning, and over 640,000 views by early Sunday morning, July 1st.) A related story, ‘American Muslims Stone Christians‘, by Alan Kornman of the United West focused on the assaults suffered by the Christian protesters, with statements like  “The multiple violent attacks on Mr. Ruben Israel and his friends was the most violent to date at the Arab Festival.  The fact the violence by the predominately Muslim crowd against Christians was allowed to continue freely under the watchful eye of the Wayne County Sheriff’s Department is criminal. ” Kornman makes no mention of the pig’s head on a pole in his article.

A story in World Net Daily, entitled ‘See Muslim Mob Stone Christians In US‘, made no mention of the pig’s head, and focused on the mob violence.  “According to the tape, the mob began chucking more stones, bottles and debris as the Christians were injured…  Israel explains that the mob throws things and becomes more aggressive when police leave the scene.”

The pig’s head on a pole is clearly visible in several YouTube videos, including a longer video clip (over one hour) released by Itching Ears Ministry, and another video clip (warning – foul language and disturbing images). 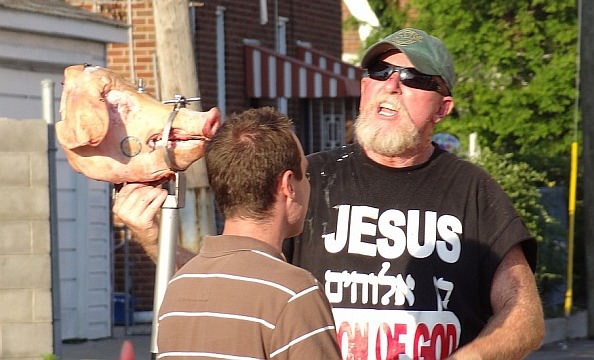 UPDATE 1-July-2012 at 3:37pm – recent comments by readers are typical (and demonstrate) why we had to investigate this story in more depth, to discover what really happened:

Genie:  To all the other Christians on this thread:  If you think that going into an Arab festival with a pig’s head on a stake, and hurling insults at people through a megaphone is  “going forth to share Christian love” I would like to know what Christian denominations you belong to which teach this as a way to win hearts over to Christ, so that I can avoid them.

Barry’s reply to Genie:  Does it bother you at all to make up these absolute bogus LIES to try and JUSTIFY your muslim god of perverseness and constant war/slaughtering of innocent people? TO ALL PEOPLE READING THIS THREAD IF A PIGS HEAD WAS AT THIS EVENT A MUSLIM TERRORIST BROUGHT IT!

This type of ignorance (Barry’s reply) can be found in Dearborn, and throughout the United States.   What will they say next? “I will only believe the story about the pig’s head if I can stick my finger in it’s nose.”

There is a video currently circulating that is raw footage taken by a group called the Itching Ears Ministry who attended the Arab International Festival in Dearborn this past month.  I wasn’t there at the time, and there are conflicting reports of if and to what extent this group incited the crowd at the festival to react violently.  The video shows people throwing bottles. The physical response was wrong and needs to be addressed.  However, this is not the first group that has come to Dearborn to make a statement about how right they are and how wrong we are.

I say “we” because this is what this post is all about (I know, took me long enough!).  Dearborn is a city made up of Arabs (Lebanese, Iraqis, Iranians, Libyans, Syrians, Palestinians, Yemeni, Egyptian, and every other segment of the Arab population), Italians, Europeans, Jews, Hispanics, African Americans, Asians, Native Americans, Christians, Muslims, Atheists, Heterosexuals, Homosexuals, and everyone else I can’t list here because it will go on forever.  What happens to any one of us in Dearborn happens to all of us. We each are a reflection of this city, what it stands for, and what we can be.  Right now, I think we can do better.

The reaction to the video is probably the most shocking of all.  It doesn’t take much until, all of a sudden, it’s “those Arabs” and how cruel and mean they are that is the problem in Dearborn. The solution? With that kind of thinking, I don’t think there can be a solution besides more hate and division which will eventually turn this city upside down.

Change comes quicker with things we can impact most directly.  I can’t control who comes into Dearborn and what message they have to bring.  But I can choose how I respond and what message my response makes.  The same way we should not have to stand for being a playground for those who simply want to stir the pot and capitalize on the reaction, we should not have to stand for the division and hatred felt among the different communities within our borders.  Instead of relegating the problem to one sector of the city and blame them for their action or inaction, let’s get together to talk about how the problem affects us all and reach a solution or two.

The bottom line is, I think Dearborn is a great place to live and has incredible potential.  I am willing to work with every person in Dearborn to figure out how we can reach that potential.  But, there is no room for racism or bigotry.  We can have a frank conversation about the differences and problems our community faces and how to solve them without hateful rhetoric.

Sometimes, to reach that point, we need to take a close look at ourselves and be honest about what we are really saying.

It’s time to Set Ground Rules for how we address problems in Dearborn and in America.