DEARBORN, Michigan – Twelve sculptures have been placed throughout Dearborn as part of the community’s 2012-2013 Art in Public Places Midwest Sculpture Initiative (MSI). Funding for the project is provided by the Dearborn Community Fund and the East and West Dearborn Downtown Development Authorities. Each month a different sculpture and sculptor are highlighted.

“The Spirit of Comics” by sculptor Amy Havens is featured for September. Installed on the corner of Maple and Osborn behind Dearborn City Hall, this whimsical piece is the artist’s visual acknowledgment of her love of comics. Drawing inspiration from action heroes like Batman, Superman and Wonder Woman, Havens has incorporated characters and words straight from the pages of popular action comics in to this nearly 10 foot high sculpture which is constructed from welded and painted plasma-cut steel. 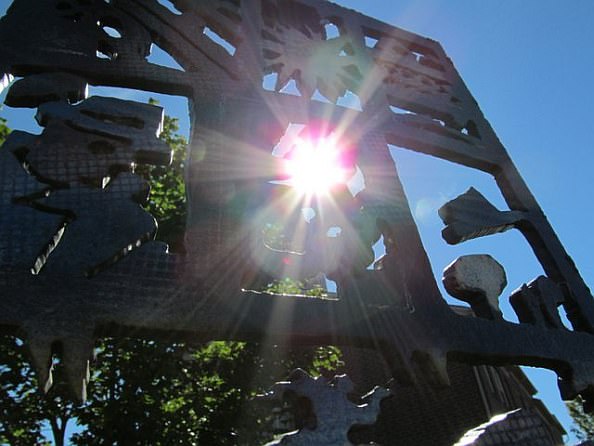 Havens, who currently resides in Ocean City, New Jersey, is an Ohio native and received her BFA in Ceramics and Art Education from Bowling Green State University. The daughter of James Havens, another 2012-13 MSI featured sculptor, Havens likes to create pieces that appeal to young and old and frequently looks to literature for inspiration.

In 2008, Havens received a Visiting Artist Award from the University of Toledo. Her work has been included in exhibitions in Ohio, New Jersey and Michigan.