EDITORIAL – Dearborn area residents who have relatives living in Syria say they cannot sleep at night worrying about the safety of friends and family members.

For those who don’t understand Arabic, the video depicts “the shabeeha (armed bandits) of the Syrian regime terrorizing a family with violence and profanity, cursing their mothers and fathers.”

Laila Alhusinni, host of Good Morning Michigan – Radio Baladi – U.S. Arab Radio Network said: “These innocent civilians were accused of protesting against the Syrian regime [or they are accused of  being relatives of protesters].  They have been arrested and forced to disclose where their relatives are.  This is a war crime against humanity.  The Syrian regime is targeting, terrorizing, and humiliating innocent people. We need to raise public awareness about these war crimes among Americans who are not informed about what’s happening in Syria.” 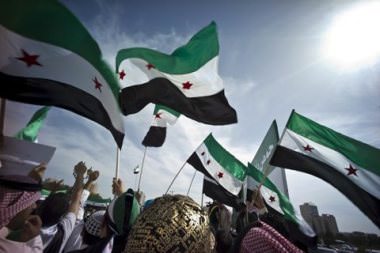 “The uprising in Syria is only getting bloodier” claims Nathaniel Rosenblatt, writing in Foreign Policy —  “Prominent human rights organizations have estimated that the death toll from the conflict now exceeds 30,000 people. And it is only getting worse: More than 300 people were reportedly killed on Sept. 26, making it one of the uprising’s bloodiest days.”

According to a recent report by the World Food Program:  “Over 1.2 million people are displaced inside Syria and some 250,000 people have fled the country and became refugees in neighboring countries. Many of them left their homes and had to flee with their families with only the clothes that they were wearing.”

Xinhua reports that “Syrian President Bashar al Assad has declared that he would not use chemical weapons on his own people, but the Pentagon says it has intelligence that some weapons may have been moved.”  U.S. Defense Secretary, Leon Panetta  confirmed there have been multiple movements of chemical weapons in Syria.

Gary C. Gambill, writing in The National Interest claims Intervention Won’t Save Syria. “A humanitarian intervention must be expected to have a positive net impact on civilian life over the entire arc of the war, which won’t end with Assad’s downfall… The dilemma, then, is how to prevent atrocities in Syria today without aiding in the commission of others tomorrow. Most intervention plans under discussion amount to direct or indirect military support for insurgents likely to perpetrate atrocities once the tables have turned.”