DEARBORN, Michigan – Beginning at 10 am on Friday, October 19, 2012, hundreds of fourth through eighth grade students will lace up their running shoes and take to the course at Ford Woods Park located at the corner of Ford Road and Greenfield in Dearborn for the first Annual Robert Cipriano Memorial Cross Country meet. 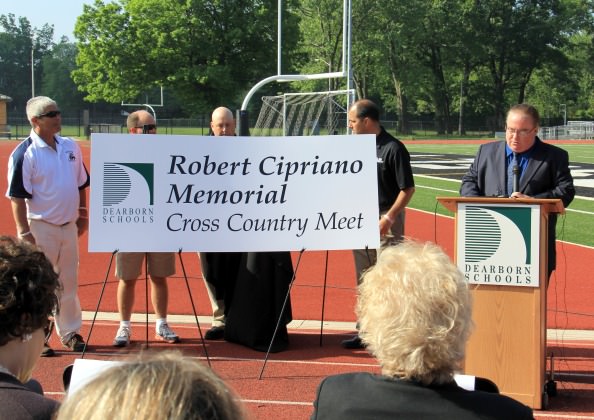 “The goal was to create an event that will honor the work that Bob did here in Dearborn, help his family, and benefit a large number of Dearborn students,” commented Dearborn Public Schools Superintendent, Mr. Brian Whiston.

Dearborn Public Schools students have spent the first weeks of school getting in shape and qualifying for the big event. Teams from each elementary and middle school will compete in four different races arranged by age group and gender. The district has teamed up with the Dearborn Education Foundation, the Dearborn Track Club and the City of Dearborn to help coordinate the event. All runners will receive a ribbon for taking part, medals will be awarded to the top ten runners in each age group, and a trophy will be presented to the top elementary and middle school team.

One of Mr. Cipriano’s last projects while working with the Athletic Directors was to create a running program for middle school and, if possible, elementary students that would encourage competition, lifelong fitness, and fun. The annual cross country meet will do just that. Equally important, this event may encourage students to make running a part of their everyday healthy lifestyle now and beyond their school years.

Bob was an avid runner and according to some of the kids he coached, including his son Tanner, running was one of Bob’s top training tools and the key to success no matter what the sport!  The district feels that this event will carry on Bob’s work with athletics, his commitment to the children in Dearborn, and pay tribute to his love of running.

Mr. Cipriano was Director of Business Services for the Dearborn Public Schools but also oversaw athletics in the district.  Bob was tragically killed in April, 2012 when two young men broke into his home and attacked him, his wife, and son. Mr. Cipriano’s wife and son are still recovering from the injuries they suffered in the attack. Bob’s other son and daughter were able to avoid any physical injuries during the violent incident.