SOUTHFIELD, Michigan – Detroit-based, inspirational rapper/singer/poet, Mahogany Jones and her band have just returned from a month and half abroad representing the country as an official U.S. Music Ambassador. Now the musical artist will appear on Detroit’s Fox 2 (WJBK) Morning Newscast on Friday, November 30, 2012 during the 8 a.m. segment. 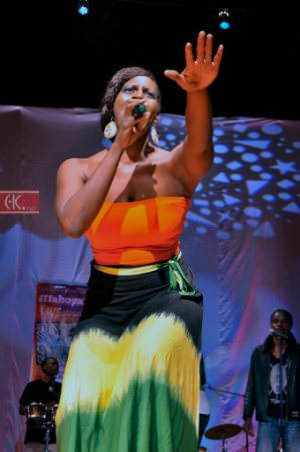 Mahogany Jones performs at the Amaka Arts Festival in Zambia

During the interview, Mahogany Jones will share about her tour across Zambia, Botswana, Rwanda, Uganda, and Ethiopia and inform the audience of the now open application process with the U.S. State Department’s American Music Abroad program.

Mahogany Jones-Live was one of 12 ensembles selected by the U.S. State Department out of 300 applicants to represent the United States through the American Music Abroad program administered by American Voices. As part of their mission to build cultural bridges, Mahogany Jones and her band performed free concerts, conducted music workshops, encouraged youth in schools, collaborated with native artists, engaged foreign dignitaries and promoted America’s musical contributions on foreign media outlets.

Upon returning to Detroit, Mahogany Jones has been asked to serve as a judge for the next round of artist selections. In addition to this, Jones seeks to speak to media to inform other artists of how they can apply for the same amazing opportunity American Music Abroad.

When not performing abroad, Mahogany Jones, whose real name is Charyse Bailey, substitute teaches in the Warren Public school district, leads after school mentoring programs with the non-profit The Yuinon, and co-hosts an Open Mic celebrating women in hip-hop at Old Miami with the 5e’s Gallery The Foundation.

For more information about Mahogany Jones and American Voices or to request an interview, please contact her management at (313) 986-1966 or email [email protected]