DEARBORN, Michigan –  For years, it has been a tradition for Brittany Garcia’s family, who are residents of Garden City, to drive through the holiday display at the Wayne County Lightfest; then stop for pictures with Santa Claus at the “Santa Snaps” workshop sponsored by the Rotary Club of Dearborn. This holiday she decided what better place to deliver her five-year-old son Dominick’s biggest Christmas wish— the return of his dad Specialist Jaime Garcia from Afghanistan.

Garcia’s sister, Melissa Pangle, contacted Wayne County to help with the special delivery.  The County then contacted representatives of the Rotary Club of Dearborn to arrange for the surprise reunion of SPC Garcia with his son.  According to Garcia, the Wayne County Sheriff’s department was a big help as well. 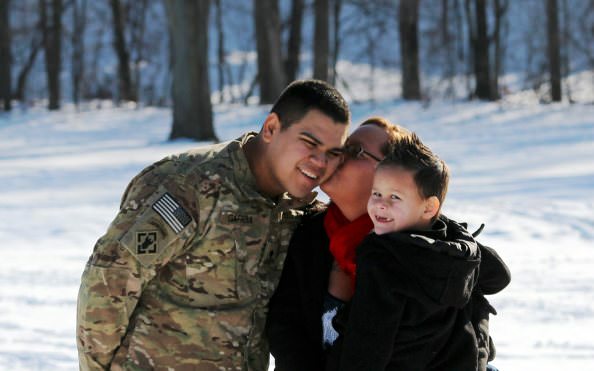 On Saturday, December 22, Brittany Garcia went to the airport to greet her husband who had recently returned to his Army post at Fort Carson, Colorado following an eight month assignment in Afghanistan.  Dominick, who was busy playing with his cousins, was unaware of his dad’s homecoming.

When the Dearborn Rotary Club was notified of the surprise visit, Santa and his helpers agreed to help.  SPC Garcia and daughter Jacqueline Kochans hid in the storage area directly behind Santa’s chair before the arrival of his wife and son.

Dominick’s mother was very assured that her son would ask Santa for his dad.  “We had already paid a couple of visits to other Santa’s, and that was always his request,” she said.  “The Rotary Santa that night was perfect, and he delivered.”

“We’ve had a lot of surprises in our Santa Snaps workshop over the years, including marriage proposals on Santa’s lap, but this was probably the most moving of all,” said Dearborn Rotarian Jim Ives, whose own son is scheduled for deployment to Afghanistan within the next few months.  Ives was on hand to take pictures of the reunion. 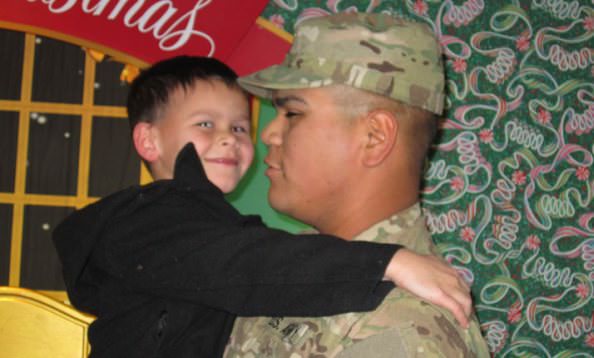 Dominick Garcia, 5, shows his delight and surprise at the Dearborn Rotary “Santa Snaps” workshop during the Wayne County Lightfest as he is reunited with his dad U.S. Army Specialist Jaime Garcia, following his return from Afghanistan.

Since 1997, the Rotary Club of Dearborn has hosted the “Santa Snaps” workshop during the Wayne County Lightfest as a community service and fundraiser for the Club’s projects and scholarship programs.

From Thanksgiving to Christmas Eve, it is estimated that 160 volunteers participated in the workshop, including members and friends of the Rotary Club of Dearborn; Fairlane Sunrise Rotary, Interact Clubs at Dearborn High School, students from the Henry Ford Academy, along with faculty, honor students and members of the newly formed Rotary Club at Henry Ford Community College.

There is no charge to visit Santa though donations of $7 are welcomed for each framed photo that is taken.

“It’s not unusual for large groups of family and friends to be photographed together with Santa,” said Dearborn Rotarian Rick Enright, who co-chaired this year’s event with Rotarian Jim Thorpe.

According to Hassen Hammoud, 2012-13 president of the Rotary Club of Dearborn, good weather and extra days this year between Thanksgiving and Christmas made this year’s event highly successful.

Hammoud said, “I don’t know how we’re going to top this family’s reunion. It meant a lot to all of us, and we thank Specialist Garcia for his service.”

Rotary is the world’s first service organization, which was founded by Paul P. Harris in 1905 in Chicago, Illinois. The name Rotary is derived from the early practice of rotating meetings among members’ offices.  Today, Rotary has evolved into an international service organization of 1.2 million business and professional leaders in 33,000 clubs worldwide.  The Rotary Club of Dearborn is one of 50 clubs in Rotary District 6400 which includes Wayne, Monroe and Lenawee counties in Michigan and Essex County in Ontario.  Dearborn Rotary meets weekly at Park Place Catering in Dearborn. For additional information, visit www.dearbornrotary.org  or call 313-278-7233.