DEARBORN, Michigan – Dearborn city officials serving terms in 2014-2017 were inaugurated on Thursday, Jan.2, 2014 during a formal ceremony at the Michael A. Guido Theater inside the Ford Community and Performing Arts Center.

Master of Ceremonies was Debbie Dingell, president of D2 Strategies and chair of the Wayne State University Board of Governors. Michigan Supreme Court Justice Brian Zahra administered the oath of office to each elected official.

The ceremony included a tribute to retiring councilwomen Nancy Hubbard, who was unable to attend, and Suzanne Sareini. Both had served for 24 years on the council. Congressman John Dingell, along with Mayor O’Reilly, presented a special tribute to both women. 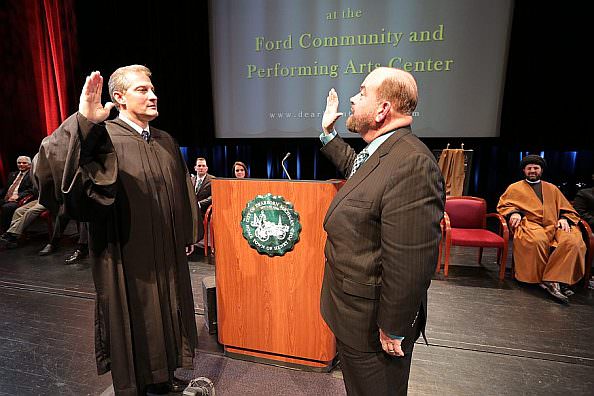 Michigan Supreme Court Justice Brian Zahra administers the oath of office to Mayor John B. O’Reilly, Jr. during the inauguration ceremony on Jan. 2, 2014

Starting Monday, Jan. 6, the ceremony will be available to view on demand on cdtv.pegcentral.com.