LETTERS – During the summer of 1963, I was working for a landscaping firm which put in new or replacement lawns, for homes and businesses.  I had a friend, who also worked with me and we were invited to a Labor Day Weekend Party at Joyce Symons house on Hanfor Street in Allen Park, Michigan.  Joyce Symons was a State Representative for this voting district for years. 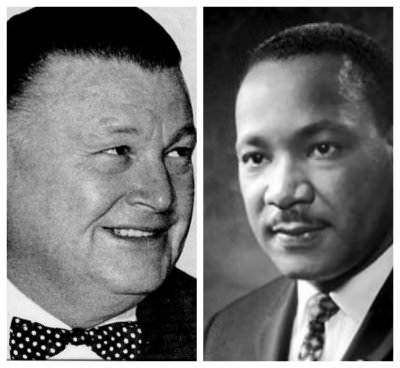 I was 18, at the time and my friends and I were sipping our brews and mellowing out on all of the gorgeous gals at the party and then out of nowhere, an immense mass of folded flesh  approached a podium on the lawn. This person was dressed in the usual togs, that an obese person wears, as well as a pair of horse suspenders, in order to hold up his pants.  He was introduced by Joyce Symons, as Mayor Orville Hubbard of the City Of Dearborn, Michigan.

He began to utter his thoughts on Martin Luther King’s Freedom March, earlier that year, in Washington, D.C. As my friends and I were sopping up our suds, we suddenly became aware of the fact, that the mood of the party, had suddenly changed from conviviality amongst people, to a very disturbing somber mood created by non-other than the tyrannical, despotic, Czar of Dearborn, Michigan, Orville Hubbard.

I immediately arose, from the lawn chair, that I was sitting in and turned to the man who was speaking, what I thought was utter nonsense, about impending riots due to the efforts of Martin Luther King, and I said and I quote “Oh Shut Up, Fatso!” The old people at the party got all upset at my friends and I, but we were not asked to leave.

There are very few people, that can ever say, that they put Mayor Orville Hubbard, in his place and told him off, to his face (ugh)(sic).

I have referred to the City Of Dearborn, as a racist city,  during that time — certainly, not today! However, many African-American families had issues, about traveling through the City Of Dearborn, in their cars, during the daylight hours, in the 1940’s and 1950’s. Many African-Americans, were stopped, by the police and detained and put into holding cells, for hours, for minor infractions, such as equipment violations and wrong turns and similar violations.

Since the mid sixties, the City Of Dearborn has come a long way and its earlier throwbacks, to the rights of individuals, has been addressed, however, there are the seeds of racism, that still linger in that city, today! I have two friends of mine that are still living and they will corroborate this story.

Robert Brosch lives in Allen Park and is the moderator of The End of Racism on Facebook.