You are here: Home / Community / Do You Love Your City? Why I Moved Back to Dearborn

DEARBORN, Michigan – Do you love your city?

One of my all-time favorite classic movies is Frank Capra’s 1947 It’s a Wonderful Life starring Jimmy Stewart and Donna Reed. Although this film is almost exclusively and religiously watched during the holidays, apart from the tear-jerking Christmas Eve ending scene, Wonderful Life isn’t really about Christmas at all. The film is really about the strength of family, the importance of community, and the blessing of blooming where you’re planted. 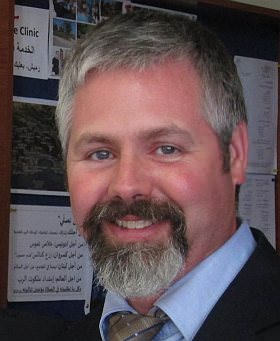 I’ve always identified closely (maybe a little too closely) with Jimmy Stewart’s character, George Bailey, a young man from a small town with big transcontinental dreams. George spends most of his life feeling utterly trapped in his home town. His little brother becomes a WWII hero, goes to college, and then lands a job upstate with a lot of upward mobility. His best friend makes his millions in “plastics.” All the while George accelerates towards his 40’s (complete with fedora and pipe) just eking out a living, driving a broken down car, living in a “drafty old house,” and holding down the fort at his deceased father’s “nickel and dime” Bedford Falls Building and Loan.

Because of his growing resentment for being stuck in Bedford Falls — George becomes blind to the great blessings he has in his beautiful loving wife, his precious four children, and all the dedicated friends he has made in the community over the years due to his benevolent heart. George Bailey, though he can’t see it until it is all mysteriously and momentarily taken away from him, is a truly blessed man who himself has been a tremendous blessing to his family, friends, and community.

I have reasoned like the younger George Bailey for the better part of my life. Just three months after the Beatles broke up, I was born at Oakwood Hospital, the same hospital where my mother was born. I grew up only nine blocks from my mom’s childhood home. I too had a great childhood there. Whether playing baseball in Crowley Park on one of Adray’s teams or swimming at the public pools I have fond memories of growing up in Dearborn in the 70’s and 80’s. I attended all the same schools my mom did:  Samuel B. Long, O. L. Smith, and Edsel Ford. I even grew up in the same church both my mother and grandmother had grown up in, First Baptist Church. Life was good. But as I entered my later teen years I began to fear that I’d suffocate if I didn’t get out of my home town. Dearborn became my Bedford Falls. I wanted out.

I wanted to see the world. I wanted George’s trunk with all the stickers from countries all around the world in foreign languages and to be admired for it by my peers.

Unlike George Bailey, however, I did get my chance to move out and see the world. But Dearborn kept calling me back. For a long time I resisted. My travels began with going away to Michigan State University where I met my wife. Of course, I worked summers back in Dearborn for my friend Jay at Retro Image on Michigan Ave. And yes, after we graduated Christie and I got married back at my home church where my parents held their own wedding twenty-nine years earlier.

Still not wanting to get stuck, we were off again. Before landing back in Dearborn again five years later, we would live in New England while I completed my master’s degree at seminary and spend a year in the Middle East studying Arabic. One would have thought those years away should have satisfied my concern for getting stuck in my hometown. But after five short years (and four children) in Dearborn I still couldn’t come to terms with being a “townie.”

So, feeling like I’d burst if we didn’t move far away, we were off again. We spent two years in Tacoma, WA (where child number five was born), two years of traveling coast to coast speaking in our affiliate churches, and six years in Lebanon. Staying six years in one place was a record for us but even in Lebanon we couldn’t seem to stay put.

We lived on the twenty-third floor of a high-rise in Beirut, Lebanon for only a year before we moved and spent two years in a remote village near the southern border. I taught at two different schools in our first three years. We spent our final three years in the southern coastal city of Tyre teaching for a church there. I was also working on another master’s degree in Beirut, this time in Islamic Theology and Philosophy, which kept me commuting three to four hours twice a week during our entire time living in southern Lebanon.

We had come to be utter nomads. In all we had moved house seventeen times in twenty-one years of marriage! We no longer knew what it was to really live in the place where we physically resided. For all of my national and international pursuits I had become blind to the great blessings that are reserved for the one who puts down roots and gives back to the community that had invested so much in one’s early years.

I needed an experience akin to George Bailey’s encounter with Clarence, the angel, in order to see things differently. It came in the form of an observation of the growing irony my life and work had become.

In my heart of hearts I know I am called to be a pastor. I walk with God and spend my time encouraging others to follow God. I had been a pastor in America but in Lebanon my work had come to focus on training and encouraging local Lebanese pastors in their own ministries. This focus was based in a strong conviction that the best and most naturally equipped people to lead a country’s churches (or any institution) forward are local people, not foreign consultants like I was.

Ah, but there’s the irony. There I was, a pastor from Dearborn ministering in Lebanon, convinced that the most effective pastors are indigenous pastors. That’s when the divine question hit me like a Vaudevillian sack of flower, “If this is so, then why wasn’t I pastoring a church where I am indigenous?” It was then that I got to work on applying my ministry convictions to my own life. I sat down with the family and explained why we needed to make one last move:  God was calling us back to Dearborn. That’s where we belong. I remember my second son saying, “That makes a lot of sense, dad. Why didn’t we think of that before?” Good question, son. So, our family of seven set a course for our hometown and landed here once again just one year ago, this time with the intention to put down deep roots, to hang up our hats and coats and stay awhile.

We have returned with new eyes to see and appreciate just what a unique and fascinating place Dearborn is. Where else in this country could we take a trip back in time to experience an earlier America first hand at the world’s largest indoor-outdoor museum venue and then go out for dinner and eat all the same great food we ate in southern Lebanon? Where else could I pepper my English with Arabic expressions and be completely understood? Where else could I get authentic Paczki’s and the best Kanaafi from two bakeries just blocks away from each other on the same street? Watching my boys play baseball at Levagood Park, or walking my dog around our neighborhood, I find myself often thanking God for giving me a second chance at loving my hometown.

People have asked me, “Aren’t you concerned about how Jesus taught that ‘A prophet is not without honor, except in his hometown and among his relatives?’” (Mark 6:4) This made me nervous at first until it occurred to me that I have nothing to worry about because I am no prophet! I’m only a pastor, a servant-shepherd of the church.

So, we’ve returned in an attempt to be that more mature George Bailey kind of presence in our home community. We realize that we “really had a wonderful life” here. We have decided to be a blessing to the city and the people who had been such a blessing to us. This new season finds us raising our kids, paying off a house, working, recreating, and leading Christ Community Church all in Dearborn. I still get to take annual trips back to Lebanon to teach Christian pastors at the seminary there, but now I’m practicing what I preach. I am indigenous to my surroundings too.

And as an indigenous pastor and church in Dearborn, together we are seeking ways to serve and to bless our city. One of those ways will be to stimulate the conversation around faith in our city by writing articles now and again for the Dearborn Free Press. Other ways will be to encourage our people at CCC and our neighbors to commit random acts of kindness, service, generosity, hospitality, and share the hope we have within. Insha’allah (“God-willing”), you and I will get a chance to meet. Until then, let’s decide to love our city well and never take for granted the gift of a wonderful life.