FORT WORTH, Texas –  I own a 2013 Ford Fusion, I have had a very serious mechanical malfunction over the past 3 weeks. The vehicle will completely shut down while operating the vehicle causing the steering wheel to lock, brakes not to work, emergency brake not work and finally the air bags do not deploy. I have taken the vehicle back to the dealership where I purchased it from on 2 occasions. 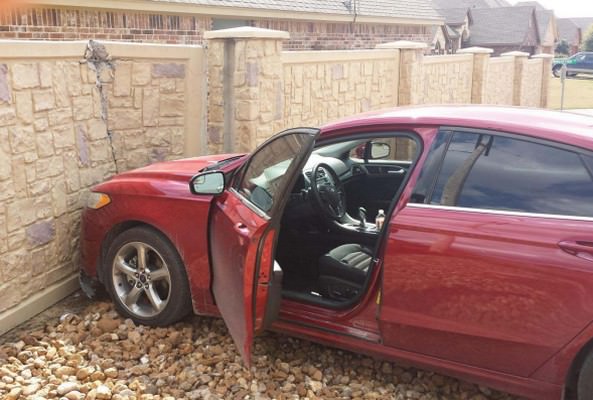 The first time was March 28th and after having the car for 7 hours I was told that they didn’t have time to look at it and that I should bring it back next week. I asked them what I was supposed to do if it happened again and I was told “Keep trying to restart the car” and bring it back next week. The week of the 31st thru the 4th I had two more occasions where the car shut down.

I took the car in on April 4th and was told that there was nothing wrong with the vehicle. I asked for a rental or a loaner car and was told that they didn’t have any. I didn’t drive the car that weekend because I didn’t feel safe putting my family in it. On April 7th I was driving home from work when the car shut down and as a result I went through a 6 foot tall stone wall that was reinforced by rebar. I was luckily not injured, I hit the wall between 20-25 MPH and had no airbag deployment. [Because the power went out?]

I posed the question if I were driving at 75 MPH a hit a 18 wheeler what was I supposed to do? I guess they wouldn’t have to worry about a complaint. I have talked to the dealership where I purchased the car and they are not going to do anything to help in the matter.

Even with the hearings that GM is going through right now with faulty ignitions they still will not do anything. I feel like Ford doesn’t want to make this right and that the dealership doesn’t either. I do not want my family or I to become another statistic for the car manufactures. I contacted lawyers, no one will speak with me because I wasn’t injured. Local news outlets will not speak  with me because it me versus a company and that looks bad. How am I supposed to get any help if no one will speak to me — or should I just let Ford get away with this?

Editors note:  None of the facts of this complaint have been verified. We hope that Mr. Farley and Ford Motor Company reach an amicable agreement on how to resolve this matter.