You are here: Home / Archives for Aymenn Jawad Al-Tamimi 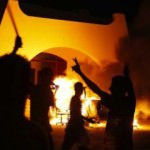 EDITORIAL - The attack on the U.S. consulate in Benghazi that led to the death of the American ambassador to Libya, Christopher Stevens, illustrates that despite the poor performance of Islamists in the elections back in July, the country still faces a serious internal terrorist threat from ideological militants who either operate with freedom from central … END_OF_DOCUMENT_TOKEN_TO_BE_REPLACED

The chief executive of Saudi Arabia’s state-owned oil company -- Aramco -- has admitted that the development of large oil shale reserves in North America looks set to shift the monopoly over global energy supplies increasingly away from the Middle East. To preface, when it comes to global petroleum supplies, a distinction is drawn between "conventional" … END_OF_DOCUMENT_TOKEN_TO_BE_REPLACED