DEARBORN, MI – The Thomas More Law Center (TMLC), a law firm based in Ann Arbor, Michigan, announced  that the City of Dearborn,  Mayor John B. O’Reilly, Chief of Police Ronald Haddad, 17 City police officers, and two executives of the American Arab Chamber of Commerce were named as defendants in a ninety-six page federal civil rights lawsuit filed in the Federal District Court in Detroit on 22-Feb-2011.

Richard Thompson, TMLC President and Chief Counsel, commented, “Muslims dominate the political and law enforcement process in Dearborn. It seems that police were more interested in placating the Mayor and Muslims than obeying our Constitution. Sharia law makes it a crime to preach the Gospel to Muslims. This is a classic example of stealth Jihad being waged right here in America. And it should be a wake-up call for all patriotic Americans.” 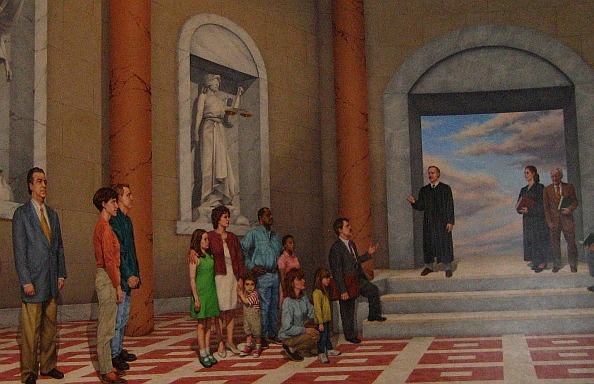 The first incident occurred on June 18, when police jailed four Christian missionaries when they witnessed Dr. Nabeel Qureshi, a Muslim convert to Christianity, peaceably discussing his Christian faith with Muslim youths. The other three, David Wood, Paul Rezkalla, and Negeen Mayel, were arrested along with Qureshi for allegedly “breaching the peace.”

“The Christians were led away in handcuffs by police to the applause and cheers of Muslim onlookers who just witnessed a victory of Sharia law over the Christians.”

The second incident occurred on June 20, as two missionaries, Rezkalla and Josh Hogg, stood on the public sidewalk handing out the Gospel of John to passersby willing to take them.

“The Christians were there for approximately 5 minutes when eight City police officers descended upon them, seized them, and brought them to the police command trailer located inside the festival where the Christians were admonished, photographed, and ordered to stop their peaceful religious activity.”

“The police assaults and arrests of the Christians, captured on video, caused a national furor over the lawless tactics of the City’s police department. Dearborn is considered home to the largest Muslim population in America. As a result, it is evident that City officials, including the Mayor, engaged in this unconstitutional official action solely to please this significant voting bloc and to submit to its will.”

Robert Muise, TMLC’s Senior Trial Counsel who is handling the matter, stated, “While the videos of the police violating the fundamental constitutional rights of our clients are utterly shocking, it is perhaps even more shocking that City officials, including the Mayor, would engage in a propaganda campaign to smear the good reputation of these Christians even after they were acquitted by a jury of the bogus criminal charges. All of this is strong evidence of the fact that Sharia is negatively influencing the City and its officials.”

Muise says the ultimate goal of the lawsuit is to “vindicate their clients’ constitutional right to share the gospel and prevent similar harassment of Christian missionaries in the future.”

According to a report in the Detroit News:

“Acts 17 Apologetics wants a judge to declare the missionaries’ Constitutional rights were violated and an injunction blocking the defendants from enforcing unconstitutional policies.”

” The group also wants compensatory and punitive damages against some defendants ‘for their reckless, wanton, intentional, and outrageous conduct, which was done with an evil motive and a callous indifference to the fundamental constitutional rights’ of the Acts 17 members.”

Jeff Watrick  (writing for MLive.com) claims the case has nothing to do with Sharia law and is more about over-reaching police officers …

“The fallacy is the assumption that you can infer subjective intention from objective consequence.”

“To be sure, the arrest of the Christian group was an absurd overreach by Dearborn’s constabulary. The Christians were ultimately acquitted and have every right to sue for redress in civil court.”

” As annoying as proselytizers can be at public events, they are free to do their thing.”