DEARBORN, Michigan – A press release from the City of Dearborn says that “neighborhood pool operations are set to begin June 11.  Hours are daily from 1 – 6 p.m, June 11 – August 14.”   Dearborn residents have been very concerned after reports that 3 out of 6 neighborhood pools would be closed this summer. A large crowd turned out for a protest rally on Tuesday night (31-May-2011), organized by a Dearborn group called  Save Our Pools (SOP).  More photos of the Tuesday night protest rally at Ten Eyck pool are on Flickr and Facebook.

“Neighborhood pools are scheduled to open on June 11” – according to the press release issued by the City of Dearborn on the afternoon of June 1st.  Dunworth Pool at Levagood Park and Ford Woods Park pool are open for the season. The hours are as follows: 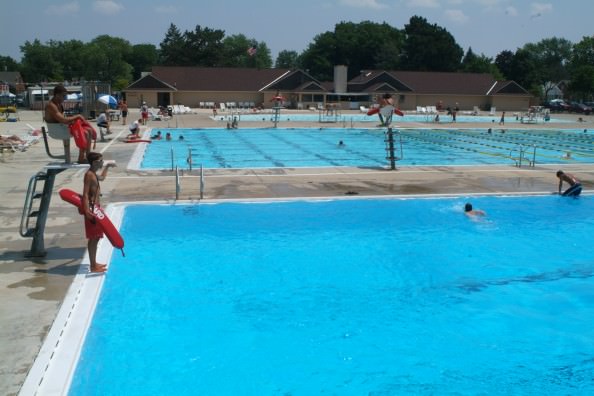 Dunworth Pool at Levagood Park in Dearborn is open for enjoyment. The pool, the largest in Dearborn, can hold more than 1,000 people. It has a zero-depth entry pool, a large lap pool and a separate diving well.

The press release says “This schedule is subject to change. Some pools or portions of pools may close early. Check with the specific pool for more information.”  Public budget hearings are being held Monday and Tuesday evenings – June 6 and 7. The topic of closing neighborhood pools is expected to be hotly debated at those meetings.

Swimmers have two payment options. Daily fees for Dearborn’s outdoor pools are $6 for residents with a school issued ID card or a photo ID.

Daily fees for non-residents are $9

Pool tags, good for admittance to the city’s outdoor pools for the entire season, may be purchased at the service desk of the Ford Community and Performing Arts Center.

Prices vary according to age and residency, ranging from $15 for pre-school age children to $100 for a family. Proof of residency and identification is required. Infants under age two are free.