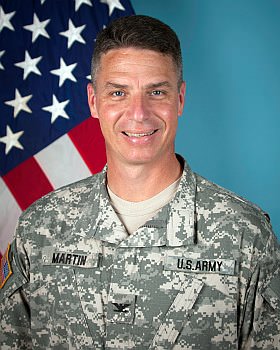 A 1981 graduate of Dearborn High School, Martin is the son of retired Ford Motor Company executive Leonard Martin, who resides in Dearborn. He was commissioned as an armor officer upon his graduation in 1986 from the United States Military Academy. Martin earned a Master’s Degree in education from the University of Louisville, and is also a graduate of the U.S. Army Command and General Staff College and the United States Army War College.

Martin was selected in December 2011 for promotion to the rank of brigadier general. A date for the promotion ceremony has not been announced.