You are here: Home / Community / Boston Bombers Leave Dearborn with the Anti-Jihad Jitters

DEARBORN, Michigan – Many Dearborn area friends and neighbors who heard about the explosions that disrupted the end of the Boston Marathon had a brief but poignant thought: “Please don’t let it be a Muslim.”

Amer Zahr said on his blog –  This Is Going to Be a Lousy Weekend : “I was planning on having a lazy Friday watching funny YouTube videos, reading my Facebook News Feed, and catching up on my TV shows.  No such luck…  So it seems that the two main suspects in the Boston Marathon bombings are two brothers from Chechnya.  And it of course did not get lost on CNN and Fox News that they are also Muslim.”

“Was this thought crossing your mind…?” asked the Facebook page of the Muslim Public Affairs Council in Los Angeles, which featured this Washington Post blog post entitled:   “Please don’t be a Muslim:  Boston marathon blasts draw condemnation and dread in Muslim world.”

The Dearborn based National Network for Arab American Communities released a statement saying, “Our thoughts and condolences continue to be with the victims of the Boston Marathon attacks. We are grateful to the brave first responders and law enforcement officers, who endangered their own lives.” 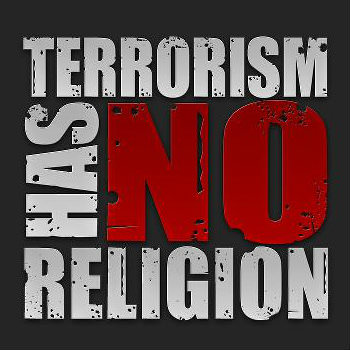 Graphic image from the ‘Memorial for All Victims of Terrorism’ page.

It also said, “we urge the media and the public to refrain from scapegoating or turning against our fellow Americans based on their racial, ethnic, religious or immigrant identity.”

The Islamic Institute of Knowledge on Schaefer Road in Dearborn is hosting an event this evening at 9:00pm – a Memorial for All Victims of Terrorism.  The Facebook event page says:  “Join us at the Islamic Institute of Knowledge as we come to together to hold a Memorial for not only the victims of Boston, but all victims around the world who are effected by terror everyday!”

An image at the top of the Facebook event page for the memorial service says: “Terrorism has no religion.”

Amal Hammoud Berry responded:  “When did anybody hold any kind of service for victims in Lebanon, Palestine, Iraq, Afghanistan, Yemen, Egypt, Bahrain?”

Ahmad Chammout commented:  “People should speak out. Why do they speak out about the white guy that sent a poison letter to president Obama. They accused him for being mentally ill – like they always say when a white American does such a terror act.”

Abu Muhammed remarked:  “When do Muslims stop begging for acceptance of people that call you a terrorist? I’m not going to say every time a Muslim does something that we’re not all terrorist. There are 2 billion Muslims. If they want to know what we believe let them pick up a Quran or ask what’s our belief. That’s not the case though. They just want to point at Islam because we allow it and beg them for forgiveness … Screw that, I’m a fifth generation American I don’t have to explain myself! When they tell us go back to the Middle East, tell em take their asses back to Europe.”

Suhaib Webb, the Oklahoma-born imam who leads the largest Mosque in Boston said: “We’re Bostonians – we mourn with the city. We stand in support with the city, with the victims. We’re hurt, equally shocked and equally pissed off.”

Imam Webb was returning from Dearborn – in route to Boston on the 15th – when he received word of the horrible tragedy, and tweeted “Praying for Boston… heavy heart as I return home” – at 3:30pm – The Boston Globe had tweeted: “Two powerful explosions detonated in quick succession right next to the Boston Marathon finish line this afternoon” at 2:59pm on the 15th.  One of Webb’s last tweets in the Detroit area:  “Old Detroit Train Station…. The rust belt is dying” with  photo attached in the early hours of the morning on the 15th.

Webb had been the keynote speaker at CAIR Michigan’s 13th Annual Banquet at the Islamic Center of America in Dearborn on Sunday April 14, 2013.  Webb, an active blogger on SuhaibWebb.com had “studied in the College of Shari’ah at the distinguished Al-Azhar University in Cairo for six years. He memorized the Quran in Mecca. The Royal Islamic Strategic Studies Center named Webb as one of the 500 most influential Muslims in the world.”

“I am deeply saddened and shocked by the recent events. Our city’s peace was taken away in a blink of an eye. Our faith is once again being called to suspicion. Innocent people are being hurt. What is needed now is meeting hate with love, trials with patience and fear with increased worship. Each and every one of us needs to be a shelter in this storm.” wrote Subhaib Webb in his Letter of Love to the Boston Community on April 19.

Jaweed Kaleem brings up a vexing question: “Muslim communities now face a vexing question:  Do they accept the men as Muslims despite the allegations against them?  If so, will they give Tamerlan Tsarnaev an Islamic burial? … dozens of mosques and Islamic groups have distanced themselves from the brothers after friends and family described them as Muslims.”

David Remnick, writing about the Tsarnaev brothers – The Culprits ( in The New Yorker ) said: “But rebellion persists, in Chechnya and in the surrounding regions … and it is now fundamentalist in character. The slogan is ‘global jihad.’  The tactics are kidnappings, assassinations, bombings.”

A report from the Daily Mail speculates that the Boston Marathon bombers were influenced by YouTube videos of  “Abdel al-Hamid al-Juhani, a Russian sheik who reportedly preaches a form of Salafi Islam that is usually associated with al-Qaeda.”