You are here: Home / Buzz / Islamic and Atheist Worldviews Challenged at UofM Meeting

DEARBORN, Michigan – Just when people may have thought Christianity had become irrelevant in today’s postmodern culture, an event like this one reminds us that it’s deeply relevant.  One way or the other, the worldview gets people’s attention when framed in a way such as, “Is Christianity Delusional?”

If you came in part way through the meeting, you might think – what is going on here? A slide on the big screen said:  “The religious fundamentalists are correct:  without God there is no morality.  But they are incorrect about there being a God.  Hence, I believe there is no morality.” ~ a quote from Joel Marks, professor of Philosophy at New Haven University. 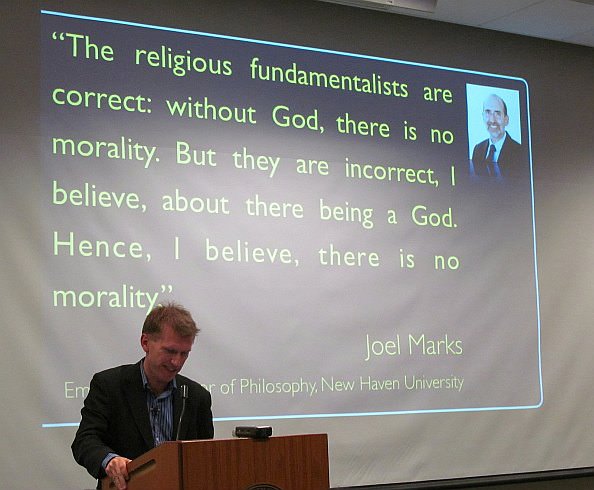 The religious fundamentalists are correct: without God there is no morality. A slide by Dr. Andy Bannister

Last Thursday evening at the University of Michigan – Dearborn, the local chapter of InterVarsity Christian Fellowship along with Ravi Zacharias Int’l Ministries (RZSIM) sponsored an event  in the main auditorium of the College of Arts, Sciences and Letters, from 6:15 to 9:00 p.m.  This is the normal time of InterVarsity’s weekly meeting in which they usually have over 100 students.  But this special event attracted over 250 people, creating a standing-room-only scenario in which many InterVarsity (IV) students gave up their seats to make room for guests.  The topic was chosen to reach out to non-members, and it clearly succeeded.  Among them there were some students present who don’t usually attend, university faculty and staff, as well as people from outside the university community. 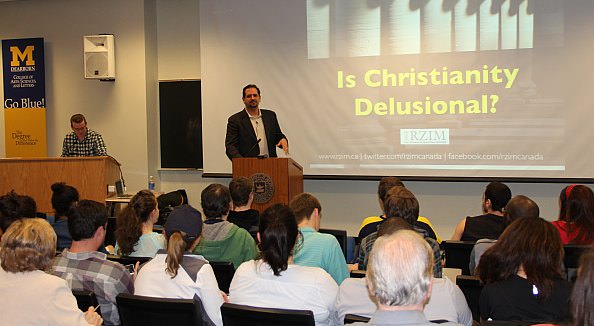 Abdu Murray begins his talk at the University of Michigan last Thursday night.

The notable speakers were Abdu Murray of Embrace the Truth Ministries, a Juris Doctor based in Rochester Hills, and Dr. Andy Bannister of Ravi Zacharias Int’l Ministries, a native Brit currently based in Toronto.

The preface was a short video in which Ravi Zacharias defined the notion of worldview as the lenses through which every person interprets and makes sense of everything.  He also put forth the four criteria by which we should evaluate a worldview, such as evidence, consistency and logical coherence; not all worldviews are equally viable, he asserted. 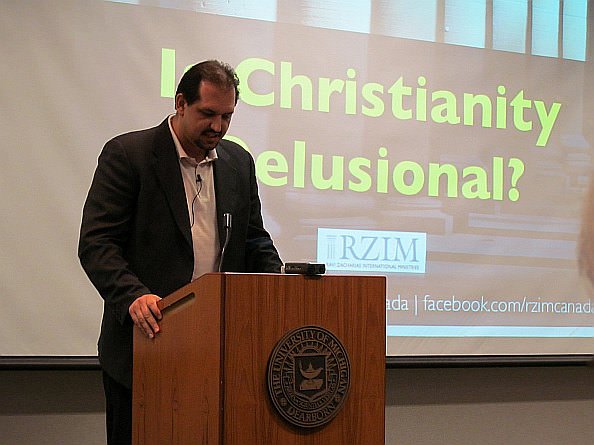 Abdu Murray – speaking at the University of MIchigan, Dearborn Campus on the evening of Thursday, April 18.

Murray was first to present, who described himself as a former Muslim from a Lebanese-American family.  Murray spent about 30 minutes telling the story of how he,  as a student at the U of M in Ann Arbor, became engaged in a personal investigation of the claims of Christianity – and eventually embraced them. 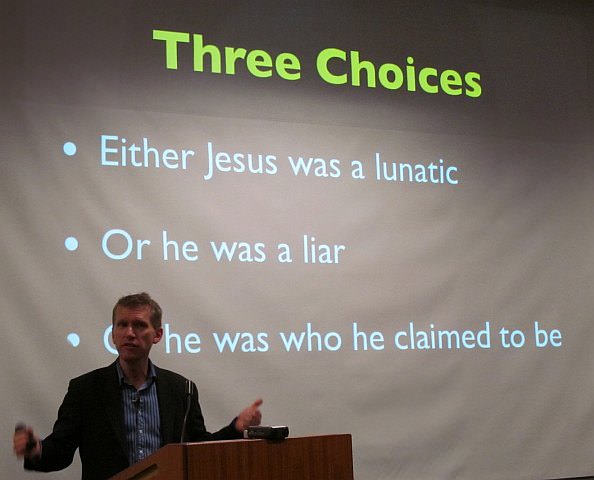 Next,  Dr. Bannister presented his engaging lecture in which he put forth eight arguments in favor of the Christian worldview.  Some of these were the moral argument, the arguments from desire, thinking and reasoning, beauty and aesthetics, and Jesus: his life, death and resurrection.  Following his presentation there was a question-and-answer period.

For Christians, it was very encouraging.  From any other perspective, it was probably thought-provoking, and compelling on one or more levels.  The question and answer period was moderated in a calm and respectful manner.  No doubt the staff and students of InterVarsity can be very pleased about this event.  Christy Patterson (an IV staff person) said that recordings of the event will be made available – if the recording quality is good. 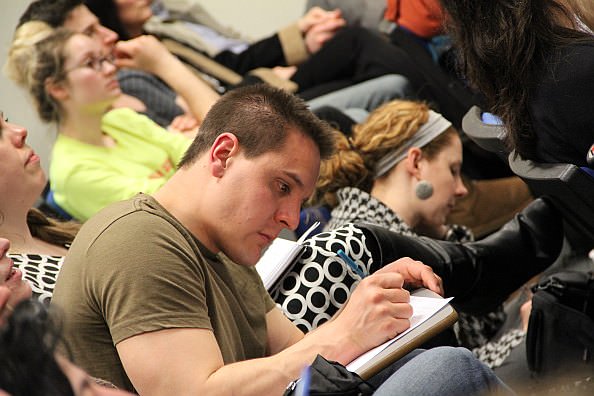 Students listening and taking notes at the InterVarsity sponsored lecture on Thursday, April 18.

Meanwhile, in Watertown – near Boston, another InterVarsity leader (Heather Ardrey) wrote: This Shouldn’t Happen Anywhere.  “I move forward praying that there isn’t a violent backlash on the peaceful Muslim brothers and sisters who live in our midst. I pray we don’t judge the Muslim community by their extremists, in the same way that I hope people don’t judge the Christian community by theirs.”  Heather works for InterVarsity’s Graduate & Faculty Ministry at Harvard University, and lives in Watertown, MA.