EDITORIAL – To hear Obama administration officials talk about the Syrian civil war, you’d think it all hinges on the fate of one man. 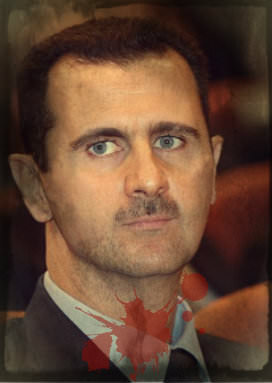 According to U.S. Secretary of State John Kerry, Syrian President Bashar Assad “calculated that he could shoot his way out” of the mass uprising that erupted two years ago, and today either fails to appreciate that he can’t or sees no viable alternative to going down with the ship. U.S. strategy is focused primarily on how to “change his current perception.” The administration has held off on providing large-scale assistance to Syrian rebels mainly because it still hopes the dictator can, with Russian prodding, be made to “read the tea leaves correctly” and relinquish power to a transitional government before all hell breaks loose.

Hawkish critics of the administration’s Syria policy also see Assad as singularly central to the conflict in Syria, counseling intervention in part because they think accelerating his downfall will bring the war to a swifter and more favorable end.

While either a negotiated or military end to the civil war would be welcome, given the staggering human cost of the conflict, both strategies for achieving this goal implicitly rest on the presumption that Assad and his immediate circle have so much power over their increasingly decentralized state and paramilitary pro-regime forces that a snap of his fingers – or of his neck – can bring an end to their fight against majority Sunni domination. But that presumption is flawed.

While Assad himself was never really the brains behind his regime, until a few years ago there was nevertheless a clear centralization of presidential authority over the Syrian security apparatus through his brother-in-law, Maj. Gen. Assef Shawkat. However, Shawkat was assassinated midway through the uprising. His wife Bushra, once considered to be as influential behind the scenes as her brother, departed with their children to the United Arab Emirates shortly thereafter.

It’s not clear who wears the pants in the regime now. Though the president still enjoys substantial institutional legitimacy in the eyes of many Alawites and other minorities, this reserve has been gradually depleting as the inevitable collapse of the Baathist state looms nearer. Pro-regime forces are fighting with far more unity of purpose than the disparate rebel groups arrayed against them, but it is a cohesion built on desperation and shared sectarian anxieties, not loyalty to Assad. It is unlikely that he can still bring them to heel in the face of determined resistance within a security establishment deeply implicated in war crimes.

Meanwhile, the President’s brother, Republican Guard commander Maher Assad — whom even regime supporters privately acknowledge to be psychotic (he once shot Shawkat in the stomach during a family argument) — has proven his mettle on the battlefield. He probably has the wherewithal to defy, if not abort outright, any effort by his brother to reach a negotiated settlement on terms acceptable to the rebels.

Moreover, manpower shortfalls have forced the Syrian army to cede effective control over many areas of the country to locally recruited militias and mercenary groups operating outside of the formal command structure, loyal only to whomever pays their bills.

Increasingly, this is Iran. Tehran is pouring financial and material resources into the conflict ($12.6-billion dollars so far, according to one estimate), and not only through the Syrian government. Its militant Lebanese Shiite ally, Hezbollah, is intervening directly in the Qusayr region and organizing indigenous militias among Syria’s small Shiite minority. Iran’s Islamic Revolutionary Guard Corps (IRGC) has been training its own Syrian national militia, though U.S. and Israeli suggestions that it numbers up to 50,000 fighters may be overblown. Clearly, the Iranians are determined to keep Syria (or parts thereof) within their sphere of influence irrespective of whether and when the regime falls. They are not angling to help governing elites negotiate a better severance package.

Syria will be at war for as long as Iran is willing to finance and resupply clients committed to resisting the rebel takeover. The rebels are not unified enough (or moderate enough) to credibly offer concessions that might entice predominantly non-Sunni pro-regime combatants to spurn Iranian protection. If Assad chooses to take a golden parachute, others will surely be found to lead the fight against Syria’s departure from the Iranian axis. They may, over time and at great human and material cost, be forced underground, but Syria will not be at peace until Iran throws in the towel (if then).

Consequently, the primary goal of U.S. policy should be to drive up the costs to Tehran of intervention in Syria as much as possible. Fortunately, these expenses already are skyrocketing. The growing financial toll of Iran’s proxy war is a huge drain on its sanctions-ridden economy. Even worse are the reputational costs of a Shiite Islamist republic orchestrating murderous violence against Sunnis, who comprise the overwhelming majority of Muslims worldwide.

Already, the conflict has led Sunni governments to vigorously contest Iranian regional ambitions for the first time. Turkey’s recent reconciliation with Israel is a harbinger of the strategic setbacks likely to attend continued Iranian aggression in Syria. With a restive Sunni minority (and widespread internet access) at home, Iran’s leaders also could face troublesome domestic political repercussions if the conflict drags on much longer.

Tehran’s only hope of snatching some measure of victory from the jaws of defeat is a ceasefire in place and an interim power-sharing formula that will allow its proxies to remain armed — thereby subverting the ensuing political process, much as Hezbollah did after the 1975-1990 civil war in neighboring Lebanon.

Overly zealous American pressure for a diplomatic solution (whatever the terms) will only encourage Iranian hopes that such a partial victory is still possible. A series of negotiated truces during the Lebanese civil war succeeded only in drawing it out for 15 years and saddling the country with a post-war political order more dysfunctional than its predecessor. A ceasefire in Syria before pro-regime forces are decisively defeated won’t produce a sustainable transition to democracy – it will only lead Syria down the same path (which is why hardline rebels and their outside sponsors will never accept a truce).

But neither is intervention the answer. Indeed, Iran would dearly love to reframe its participation in a chronic sectarian conflict as a fight against imperial powers: Internationalization of the war therefore could bolster its strategic leverage. If Western governments become invested in the fighting, the temptation to reward Iran’s disengagement from Syria with appeasement of its nuclear ambitions may become irresistible down the road. The best way the United States can make Iran cry uncle on both fronts is to not get involved in Syria.

This editorial by Gary C. Gambill is reprinted with permission of the Middle East Forum.