You are here: Home / Archives for President Obama 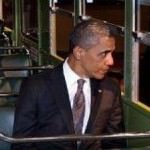 DEARBORN, MI -  President Barack Obama paid tribute to Rosa Parks during his campaign stop in Dearborn, Michigan on Wednesday, April 18, 2012 - taking time for a photograph on an historic bus at the Henry Ford Museum.  It's the same bus that Rosa Parks was riding on when she refused to give up her seat for a white passenger on December 1, … END_OF_DOCUMENT_TOKEN_TO_BE_REPLACED