You are here: Home / Buzz / On the Radio Today: US Intervention in Iraq and Syria

Dearborn, Michigan / Washington D.C:  The declared objective of the US is to degrade and destroy ISIS. In Iraq Washington is conducting airstrikes and relying on allies on the ground to push ISIS out of the territory it now controls. Those allies in turn rely on the US to provide arms and intelligence to their forces, the pesh mergah and the Iraqi central army. But in Syria the US has no allies on the ground to rely on. Will the US coordinate with President Assad’s troops to help degrade and destroy ISIS? The US cannot destroy ISIS unless it confronts the group on both the Iraqi and Syrian fronts. And if President Obama is not willing to have American boots on the ground how will ISIS disintegrate? In Iraq the US found itself in an implicit alliance with Iran fighting ISIS. Will Obama find himself in an unholy alliance with Assad, fighting each other but also fighting a common enemy? These are some of the questions that we will be discussing with our guests in Washington. 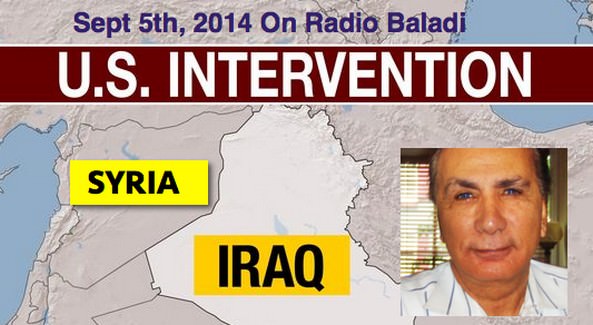 Please join Dr. Atef Gawad on Radio Baladi on U.S. Arab Radio live at 8 a.m. EST this Friday, September 5th, 2014, as he discusses the latest United States’ intervention in Iraq and Syria.  Dr. Atef Abdel Gawad is a long-time, Washington-based, Middle East broadcast journalist and newspaper columnist. He is a host of numerous live shows on Middle Eastern TV networks, and he now covers Washington for Egypt’s Channel One as well as its satellite network.

George Stifo is the President of the US Branch of the Assyrian Democratic Organization, and a member of the Syrian National Council. He is also a board member and the spokesperson for Syrian Christians for Peace. He holds a Masters Degree in Information Technology Management. He has participated in many Syrian Opposition conferences and activities, as well as giving lectures and speeches in US universities and colleges supporting the stand of the free Syrian people. He has also appeared in numerous television and radio interviews supporting the Syrian revolution for freedom and dignity.

Mohammed Alaa Ghanem is senior political adviser for the Syrian American Council, a board member of the Coalition for a Democratic Syria and a fellow at the Syrian Center for Political and Strategic Studies.

The program will be broadcasted live on WNZK 690 AM from Michigan and Washington to audiences in Michigan, Toledo, Ohio, and Windsor – Canada and for audiences in Washington, Virginia, and Maryland, the program is broadcasted on WDMV 700 AM. To listen to the program you can dial 702-489-0120 or directly dial 248-557-3300 from inside the United States.  Listen to WKNZ 690AM on the web  by clicking here.  You can communicate live via Skype with the program worldwide by adding usarabradio to your contacts.