You are here: Home / Archives for ISIS

DEARBORN, Michigan - In a press release yesterday, the American Human rights Council (AHRC) called upon the United Nations and the international community to extend immediate protection for the Syrian Kurds in the city of Kobani in north Syria. Kobani has been under the Islamic State (IS), also known as ISIS, siege for over three weeks. According to media … END_OF_DOCUMENT_TOKEN_TO_BE_REPLACED

DEARBORN, Michigan - (AHRC statement issued 18-Sep-2014): The American Human Rights Council (AHRC) joins the international community and more than 100 British Muslim imams, organizations and individuals who expressed their "horror and revulsion" at the "senseless murder" of Briton David Haines and the threat to the life of Mr Alan Henning according to the … END_OF_DOCUMENT_TOKEN_TO_BE_REPLACED 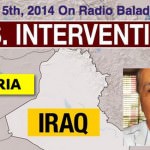 Dearborn, Michigan / Washington D.C:  The declared objective of the US is to degrade and destroy ISIS. In Iraq Washington is conducting airstrikes and relying on allies on the ground to push ISIS out of the territory it now controls. Those allies in turn rely on the US to provide arms and intelligence to their forces, the pesh mergah and the Iraqi central … END_OF_DOCUMENT_TOKEN_TO_BE_REPLACED