DEARBORN, Michigan – The Dearborn area will be hosting two conferences on Sunday, April 29 that deal with the controversial topics of  “Honor Killing in Islam” and “Islamophobia”. It’s been about one year since Jessica Mokdad was murdered. She was just 20 years old. Organizers for the Jessica Mokdad Human Rights Conference  (to be held at the Hyatt Sunday evening) claim it was an “honor killing” and say they want to prevent similar tragedies in the future. 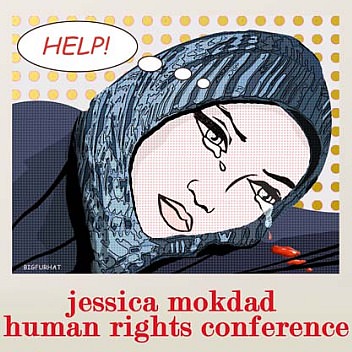 Organizers of the Rejecting Islamophobia conference (to be held at the DoubleTree hotel Sunday afternoon) claim the ‘Human Rights Conference’  is misleading and argue that Dearborn has become a “convenient target for anti-Muslim groups”  – such as the recent protest led by activist Terry Jones.

Its unfortunate that conference organizers from each group were not mature enough (or did not try hard enough) to organize one large conference where a healthy debate could occur, and differing viewpoints could be heard and understood.  These groups have very strong opinions and ideas, but how often do they really listen to each other? Today they are in Dearborn at different hotels – on the same day.  Each group is clamoring for media attention – but they won’t listen to each other and talk in the same conference room? Why is that?

Jessica Mokdad was a 20-year-old Muslim woman in Warren, Michigan, who was brutally murdered in May 2011. Fox News Detroit reported: “Authorities say a Minnesota man killed his 20-year-old stepdaughter in Michigan because she left home and wasn’t following Islam.” Jessica’s stepfather, a devout Muslim, tracked his stepdaughter over four states to murder her for bringing dishonor on her family.

“We’ve named the conference after her as part of our ongoing campaign to raise awareness and bring a stop to the phenomenon of Islamic honor killing. These girls have rights, too, they’re human beings, and yet they’re completely forgotten in our politically correct culture, in which speech that is offensive to Islam is increasingly forbidden. We’re standing for the human rights of girls like Jessica Mokdad.” – Pamela Geller said in a statement.

Geller added: “AFDI tried to place ads on Detroit-area buses offering help to people wishing to leave Islam and threatened by their families. Detroit SMART Transit refused the ads, and we sued on free speech grounds. We won, and the ads were scheduled to run, but Detroit SMART still refused to run them – and the same week they were supposed to run, Jessica Mokdad was murdered. Perhaps if she had seen one of our ads, she would be alive today. This underscores the cowardice of Detroit-area officials and the need for this Conference in Dearborn. We welcome women seeking help and resources to escape dangerous and misogynist households.”

Cassandra Mokdad told Fox News she was upset that conference organizers where using Jessica’s name to promote the conference.  “Absolutely I’ll go [to the Jessica Mokdad Human Rights Conference] I won’t let her [Pamela Gellar] sit there and misuse Jessica’s name, and I will let her know exactly how I feel.”

Islamophobia and Islamophilia Duke it Out in Dearborn

Hosting the Human Rights Conference and also speaking are Pamela Geller, and author of Stop the Islamization of America, and Robert Spencer – the  author of  several books including Islam Unveiled, and The Truth About Muhammed.

One of the Human Rights Conference speakers, David Wood of Acts 17 claims a Dearborn police officer told him that honor crimes are committed (and covered up) in Dearborn.  Details about that are sketchy. Seems like an outrageous claim.  Let’s hope the Dearborn police officer was exaggerating the truth. An ongoing lawsuit will uncover any real evidence.  Robert Muise, an attorney who is no stranger to Dearborn, is another invited speaker.  The list of speakers includes ex-Muslim human rights activist Nonie Darwish. Other speakers include Magdi Khalil  – a Coptic (Egyptian) Christian political analyst, researcher, author and executive editor of the Egyptian weekly Watani International. Mr. Khalil is also a columnist for Asharq Al-Awsat newspaper, in London, and a free-lance writer for several Arabic language newspapers. Darwin Jiles – who was  a close friend of Jessica Mokdad – will offer “firsthand testimony about Jessica being a victim of  an Islamic honor killing”.